As you can see, there's only a couple things left! To summarize them briefly:

* 17: House Holt - treated as mini-project with higher standards of application and experience required.

* 15, 16: Special editor projects - please hit me up if you're an editor and potentially interested in helping with these! See this map for more details.
Reactions: Kor_Bro, CashBanks and SchmiedOlaf

Builder
If noone has snatched up the peasant houses at 9 by the time I get back from christmas (on the 29th), I would like to have a go at them
Reactions: CashBanks

This is my first mini, and I have done most of the planning off of the minimap. 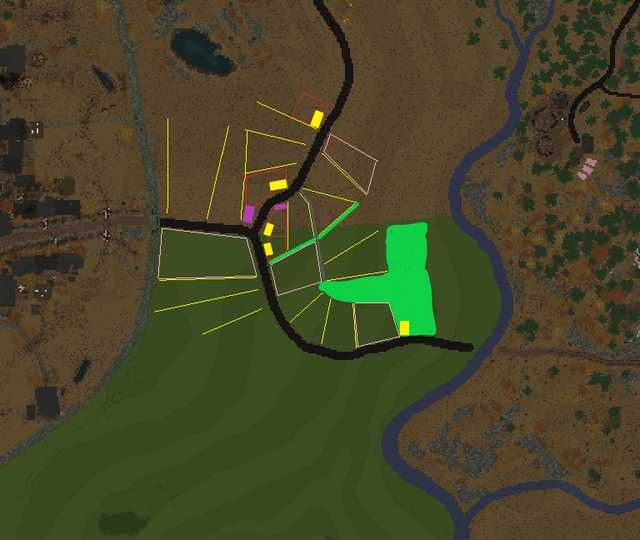 Yellow boxes are approximate location, size and orientation of farmhouses. All will be lower class peasant homes. The southeastern most house will be built in wood, the others will be built mainly in dark wh grey.
Purple boxes are approximate location, size and orientation of barns. These will both be built in wood.
Red lines indicate approxiamte borders of yards.
Pink lines indicate pastures. The pastures will all include at least one shelter for the animals, mainly in the open wooden style.
Yellow lines indicate the placement of fields, a few of which will be barren, unworked.
The thin grey line shows where I will make a new, small, accessroad to the central fields.
The green line will be a windbreak, mainly for the central pasture, but also for the main cluster of houses. The windbreak will be a small raised hill covered with bushes and tall trees.
The green blob is a forest. I will add forest to the areas towards the river on whatever parts I don't cover with fields or pastures. The area north of my northernmost fields should be forested also. I added the green blob to show that I intend to have the forest wedge in between some of the fields and pastures, to show that the farmers have cut down the forest where they want their fields, and left the rest untouched. The southereastern house is built later in the treeline.

Areas not covered by the image above:
I don't find it plausible that so few farmers would work an area bigger than what I have added in my application.
I will build up the area north of my plotted farms/buildings with mainly forest. I might extend my farmland more towards the river and add in a few more unworked fields. Any area left over towards the river will be forested.
The area south of the southwestern fields, south of the fork would be wild nature, unforested, akind to the area northwest of the area my application covers. No forest here, because of how close it is to the outer wall of WH. Towards the river, it will gradually turn into forest.

If covered by this application, I will also build the bridge where the southern fork crosses the river.

WE help.
I would need some WE help after placing the fields, pastures, outlines, etc. This will be to create the forest, wild unforested nature and river. Painting help for the fields and pastures would also be much appreciated.
Last edited by a moderator: Dec 28, 2018

Hey, just wanted to post this research for the mini- salt boiling place. as I did some research as I was interested with it at some point :/ heh but Wyl should keep me busy soon..

thanks
maj
Reactions: polopolo and Endymion

That’s perfect Maj, thanks. I was thinking about tackling the salt boiling facility if nobody else was free to do it mini-app.
Reactions: oOIOoMajic

I think @MajorTom12466 is testing for it, but I wouldn't mind if you did it together even... Also, thanks for the research Maj!
Reactions: oOIOoMajic and CashBanks

Hey Spike, looks good to me! You have my approval to go ahead, although I’d like to see the final plotting before you start opening stuff up to build.

Kor should be able to do the small terra for you, since he’s doing the rest of that area anyways.
Reactions: Kor_Bro and oOIOoMajic

Hey Johan and I are applying a farmers hamlet with Holdfast at WH.

For style we'll look at other rural houses in the WH sprawl.
The Holdfast will be one tower, a house, shed for horses and a wall around it. The pallete can be seen below.

This is a very minimalistic application, but have faith. It will be nice.

The holdfast itself is small to medium in size, with the purpose of keeping the peasants and farmers safe in case of an attack, preferably not a knightly holdfast.

A map of how you plan to use the lands for fields, pastures etc. is required
A test for the holdfast is also required.

If you need help terraforming some of the lands, I will be available to help out.

Attached is a picture of the map with a red border, and yellow marks the location of the holdfast.

So send it them awesome applications folks!
-Kor

BTW endy and johan, I'd like you to make use of the entire space for the map. Fields stretching all the way from the ones on the left, to the blue ones plotted to the right, would be great!

I'll wait a little while before responding to apps in detail, since I know at least a couple people were interested in applying.
Reactions: JohanKR850

Endy and I have made a new app for the HF and Hamlet. We hope you like it.

Builder
Hey Johan and Endy, I'm currently away on work, but I will be back Wednesday or Thursday, where I will be happy to help with any field-and terrawork you might need.
Looking good!
Reactions: JohanKR850

Builder
Just a quick note that I'll be tackling the salt boiling facility. I've begun some plotting and reading up on the salt making process.

@oOIOoMajic, thank you for your research!

Does @MajorTom12466 or @CashBanks still want to do it?

Sounds great qBBQ, let me know if you need a hand with anything

Builder
As promised, here's the application for the salt boiling facility.
Gosh this feels like grade school all over again...

Hey qbbq, wonderful job with the research and insp images!

I think that the houses should be moved inland more, so that the’re not on top of the flat northern terrainset area. I didn’t make that area (smp did it before I took over WH), but I imagine it’s not finished yet and should be sea rock like in the rest of the bay. Alternatively, you could turn some of the northern terrainset area into a manmade stone pier type thing with a breaker, and make the salt buildings there.

Thinking about it though, I realized that it’s probably important to know the rough terra intentions before final plotting. I will try to do a quick mockup of something there tomorrow for the terrain; this will also help the plotting flow a bit better spatially.

Also, one last thing, you should also use the area to the right. Probably just a couple houses with gardens.

Builder
I also extended the beach area to add more boat houses. Some of the upper parts of the rocky area has been replaced with grass.

The ground of the pier area (area under and around the salt boiling facility) will be set to northern/dark cobble mix.

Looks good! There's still some things I'd change with the plotting, but I've been talking to and working with you in-game, so at this point I'll approve. Don't open the houses for building though until we're all set with the plotting.

Endy and i are done with HF and hamlet now and are ready to get feedback and/or approval
Reactions: oOIOoMajic and AerioOndos
You must log in or register to reply here.
Share:
Email Link
Top Bottom