Haigh - moved from complete to DESTROYED.
Reactions: SseriousBusiness and Dan_Prime

Estermont - Moved from foster/not complete to in progress.

Tarth - Moved from in progress to orphaned/not complete.
Reactions: SseriousBusiness

Hey just a quick note Chelsted is done and Harte is in progress now!
Reactions: an_escaped_duck and Wazgamer

I noticed a couple of things about projects in the Riverlands, mainly a couple being absent from the list or map, or are located poorly.

Whitewalls and house Butterwell
House Butterwell used to be a wealthy house with extensive lands, with an economy based on dairy and wine. After the second Blackfyre rebellion, the house was stripped of Whitewalls, Lord Harroway's Town and 9/10th of their wealth. They probably still hold land and the castle they ruled from prior to building Whitewalls. Whitewalls was build 40 years prior to the second Blackfyre rebellion, and was pulled apart and it's earth salted on the order of Brynden Rivers. It's canon location is east of the God's Eye, closer to maidenpool than to Kingslanding (currently it's located between Harrenhall and Harroway's).

For both the leftover Butterwell lands as Whitewalls, there is a huge area east of the God's Eye without assigned locations. Assigning this area (between Hogghall, Harrenhall and Blound) to Butterwell and Whitewalls would give the house lands they match the canon description.

Pemford
Pemford is a minor noble house, which are probably from the area around Riverrun.

Nutt
House Nutt is a noble house from the Riverlands. It's warp is north of Riverrun.

God's Eye town
The town is a canon location which is described by Arya. It's located on the God's Eye and the river that flows from it. A good location for it would be at /warp ramshacklestilthouse.

Donnelwood
Donnelwood is a village that is raided by the Lannisters.

Teague
Ruled as kings of the Riverlands, adventurer background and wasn’t much respected. Should have a seat somewhere.

Hook
Petty kings which had a seat at the mouth of the Blackwater Rush. Probably managed to die out one way or another.

There are also a couple of other houses that noone knows their original region from, namely:

I think these houses and locations could be fine additions to the map, especially since they are canon. I'd be more than willing to help find suitable locations for these houses.
Reactions: Enah, Elduwin and Wazgamer

I’ll give that a look stoop, thanks! The riverlands has a lot f houses so maybe award some of the unknowns to crownlands and stormlands.
Reactions: EStoop and Elduwin

I'd like to add that the regions suggested for the unknown houses are either based on the house name or the activities and connections of the members of the house. I think the best way to find places for them is to search for large unassigned areas and consider placing one of them there.

All of the names and locations have a page on the asoiaf wiki.
Reactions: Elduwin and Wazgamer
A

To add to stoops list, the canon town of Moontown which has an unpublished location. There are large sectors of the reach, Riverlands and westerlsnds where this could go possibly. Places include:
-empty space along the coast near newkeep (near mountains of the moon)
-large unoccupied reach lands west of middlebury and east of longtable
-northern westerlands coast, near dogett, nothing’s really up here and a town in the westerlands would be cool
-greyalms/Hamell area, big road system here
-NE of white grove

Also, north of Harte, sort of between Harte and maidenpool, is an empty area that a tiny crown lands house could occupy. I’d be fine with giving up a little of the forest lands north of Harte, as I didn’t have any plans for that area really.
Last edited: May 25, 2018
E

Hoooo pls, allow me to put a small town/harbour (nothing large) at the Mander's mouth
Honestly, I could put a small House South of Uffering / West of Ball...

Just fyi, I think we established long ago that Moontown given it's name ought to be in the Vale. I was gonna suggest a semi-large town (roughly equal to Sweet Willow, waz's latest town) somewhere in the Vale of Arryn once I got around to it.

Feel free to debate and argue for some other location, but I really do believe that this makes most since the Vale of Arryn is supposedly an extremely fertile and relatively populace compared to the rest of rural Vale, but with no obvious towns located within.
Reactions: polopolo, Wazgamer and Elduwin

Is moon town not the gates of the moon?

Nah moontown has no canon other than its name

Riverlands:
I've took a look at Stoop's comments and Added some of the Houses to the Riverlands, here's a layout. 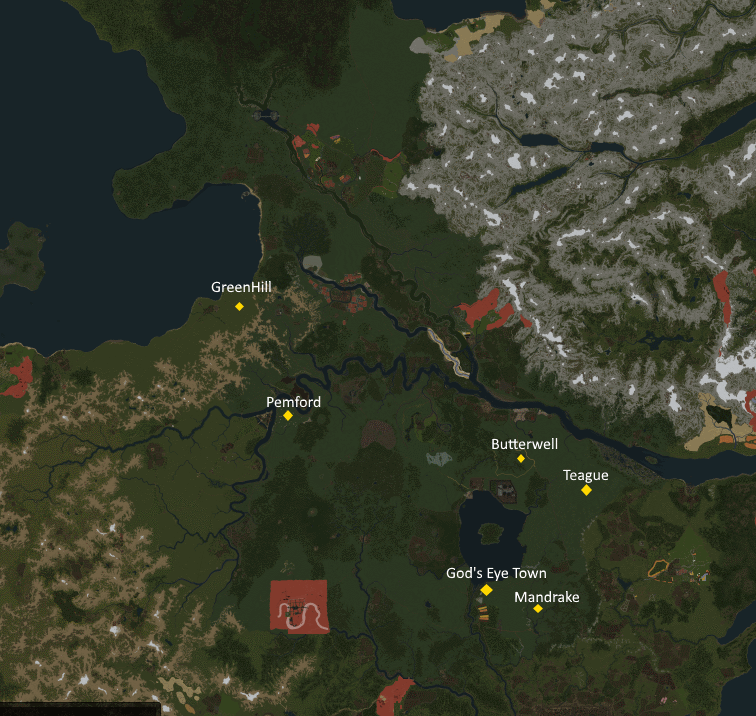 I'm kind of unsure about the Butterwell lands so i've made a code yellow = close to whitewalls, red = far the blue diamond is where I've selected for a prime position. 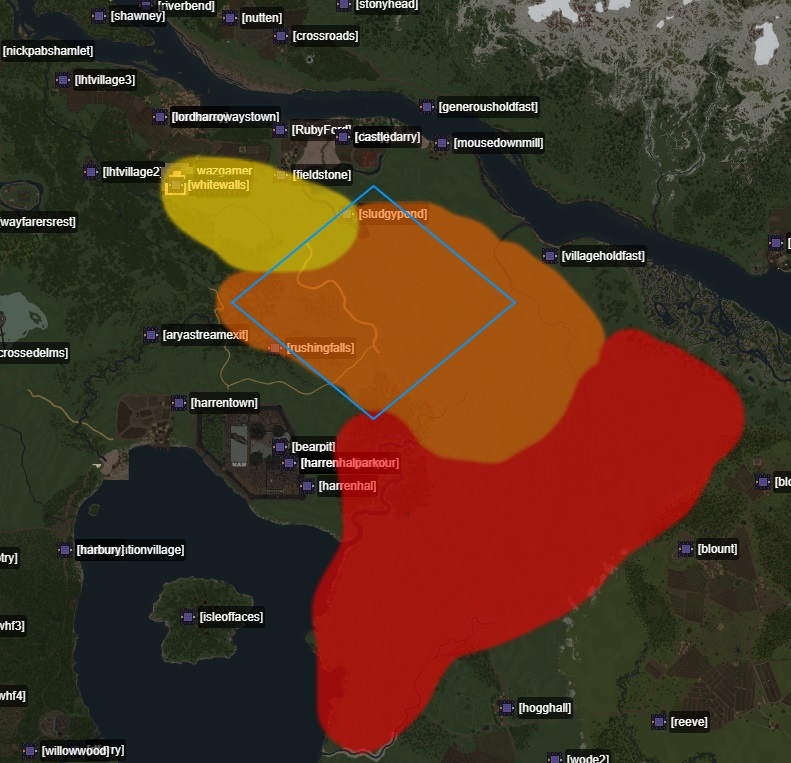 I'd go for the red area, switching Butterwell and Teague.

I feel the red area is unnecessarily far from Whitewalls, we’d brbimplying that this house owned at one point a large strip of land from the red area to whitewalls. Which just kinda seems a bit much imo

Guest
Actually, considering that I feel like it'd be appropriate as they now have 1/10 of their former lands? Also, I think it's an old debate, but I don't think we should even have trace of Whitewall (not even ruins), as (SPOILER the Hedge Knight) Brynden Rivers says:

"I have heard your bleatings, Lord Ambrose, and I believe one word in ten. On that account I will allow you to retain a tenth part of your fortune. You may keep your wife as well. I wish you joy of her.
"And Whitewalls?" asked Butterwell, with a quavering voice.
"Forfeit to the Iron Throne. I mean to pull it down stone by stone and sow the ground that it stands upon with salt. In twenty years, no one will remember it existed. Old fools and young malcontents still make pilgrimages to the Redgrass Fields to plan flowers on the spot Daemon Blackfyre fell. I will not suffer Whitewalls to become another monument to the black dragon."
Click to expand...

As such, I don't think even stones should remain more than a hundred years after the events. People shouldn't even be sure of where it was exactly.
Reactions: AerioOndos and Enah

Okay upon looking at the list of projects and the map of the Riverlands I've realised it was very unorganised, having entire projects deddicated to single villages that have no canon other than a name such as Donnelwood and Sallydance, this creates a small populated area with empty land all around it like here: 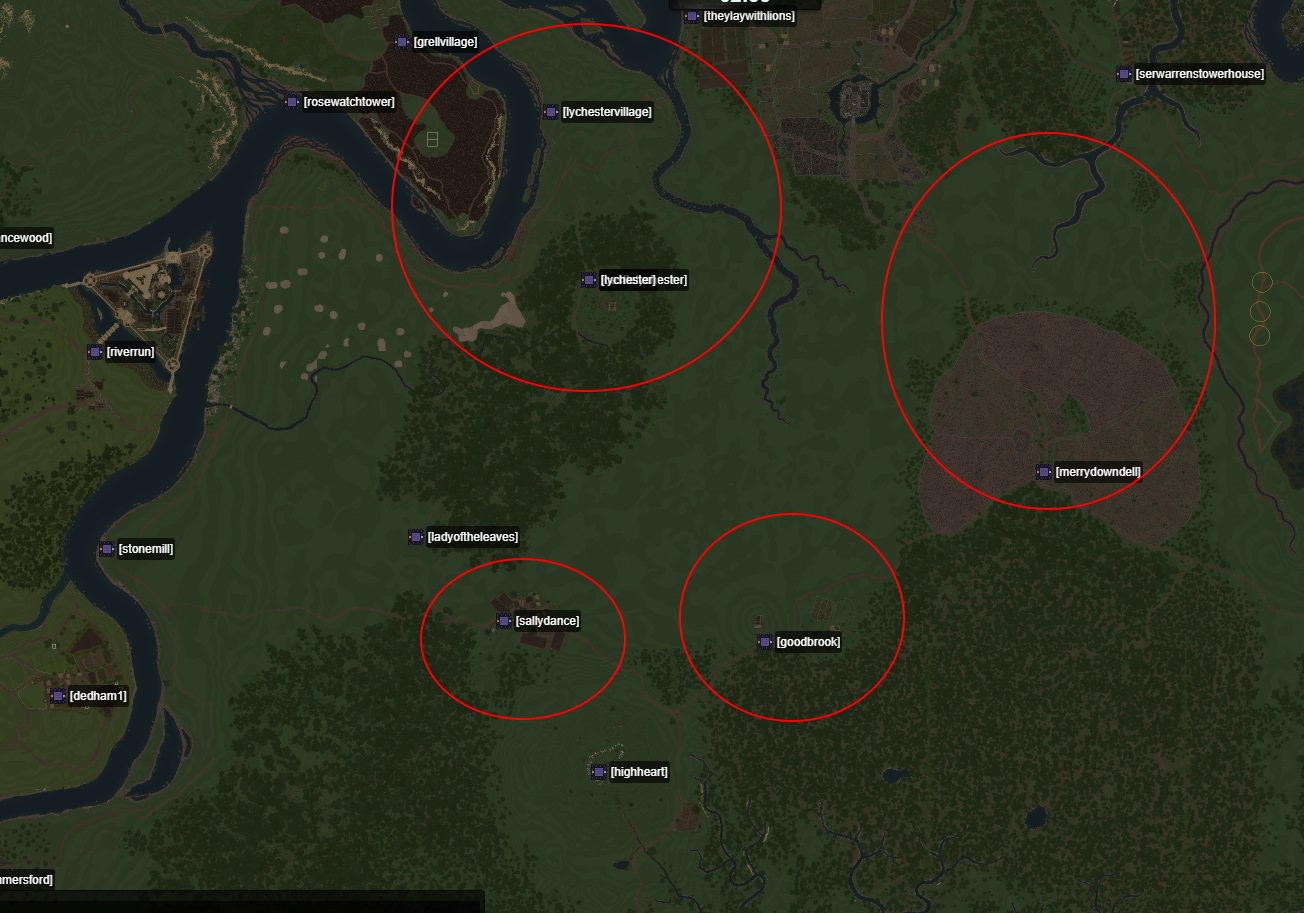 As you can see highlighted in the circles we have various villages and castles built but attached to no lands, In particular looking to Lychester which seems to only claim a small castle on a hill surrounded by forest but not the warp near by called "Lychester Village" despite this the project is apparently complete. I think this needs to be addressed as in reality although it's completely fine to apply for canon areas, it would be better in particular when it comes to castles, and villages if we were applying for houses and not leaving big gaps of empty land which are too weird a shape for anyone to even consider wanting to build there. Therefore for example in terms of Sallydance, we could make it a village in the lands of House Goodbrook, and if you wanted to do it you'd have to apply for Goodbrook. Meaning I can take out the listing of all the villages in this situation on the list and assign them to them with houses that are already listed on the document.

so I looked at all the Riverlands Houses, including adding in some unknown ones, and there's just below 60 Houses so I drew up a map with borders and geograpical features to place them. 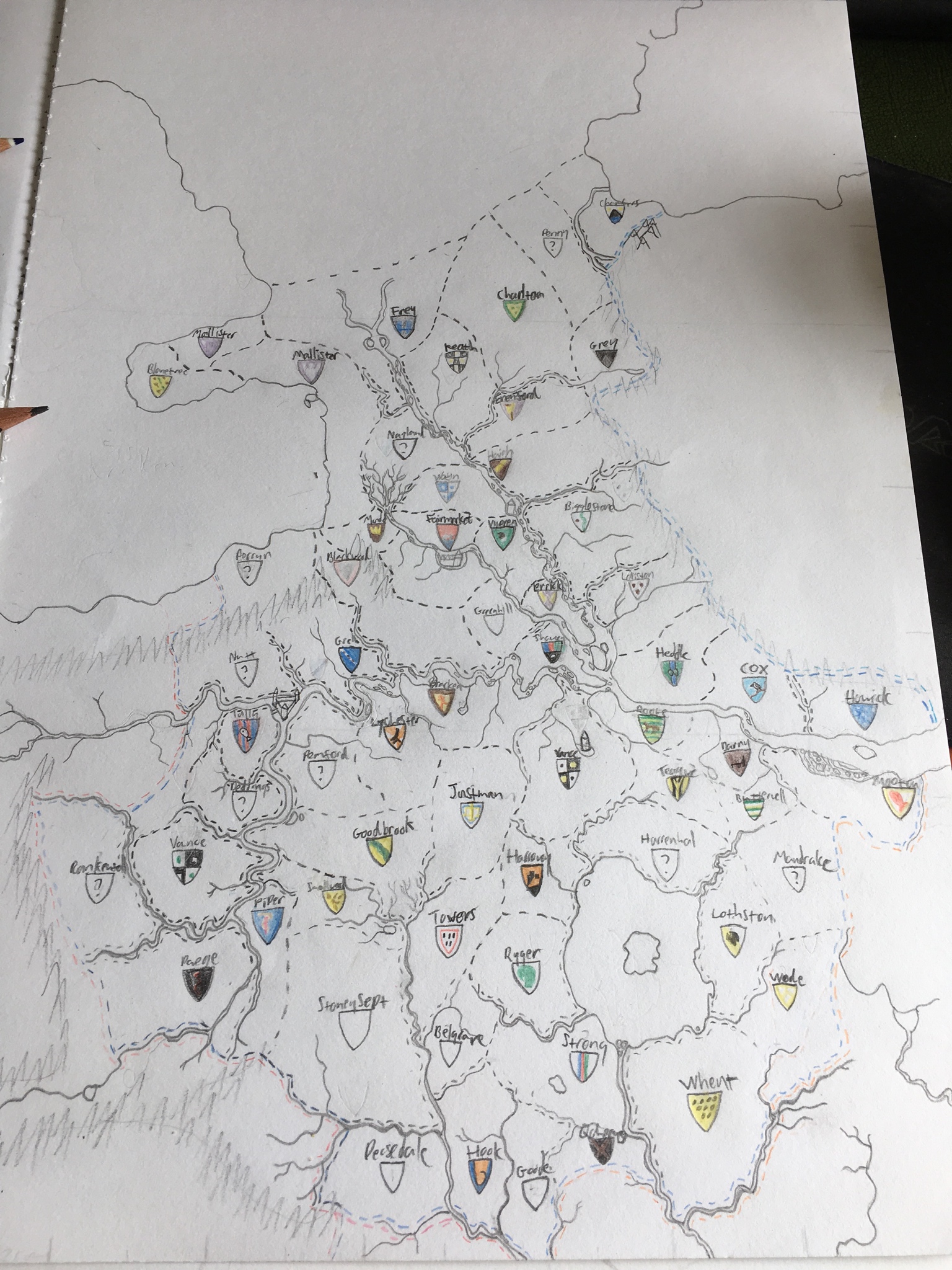 I hope this map is clear enough I took the liberty of filling the house sigils in of some we don't know due to boredom, obviously not official

Eitherway I hope this gives a clear picture of the assigned borders, I tried my best to make them logical while filling in the lands, I'd like to note that the area above Bracken next to Greenhill is controlled by House Blackwood cannonically, tried my best to show that.

I'd now like to highlight three areas on my map that need a bit more clearing up.
1. The cape of Eagles is controlled by House Mallister of Seagard, but also has a cadet house and vassal house Blanetree in those lands, Blanetree is built but the area above it isn't hence I awarded it to a cadet house as frankly we were running out of Houses

3. Harrenhal has many many houses "of Harrenhal" they are extinct but for the sake of organising lands I've placed them in around the God's Eye area, this is of course not final but it gives us something to work with when considering one of the most empty area's in the Riverlands, alongside this House Whent the current rulers of Harrenhal were deposed of their seat by Tywin, so I've given them control of Stoop's proposed position of God's Eye Town south of Harrenhal, again not final.

Here's an image showing vassalage of Mallister, and Hawick. Can add onto this in the future just wanted to show visual representation of what I was proposing for these two regions. 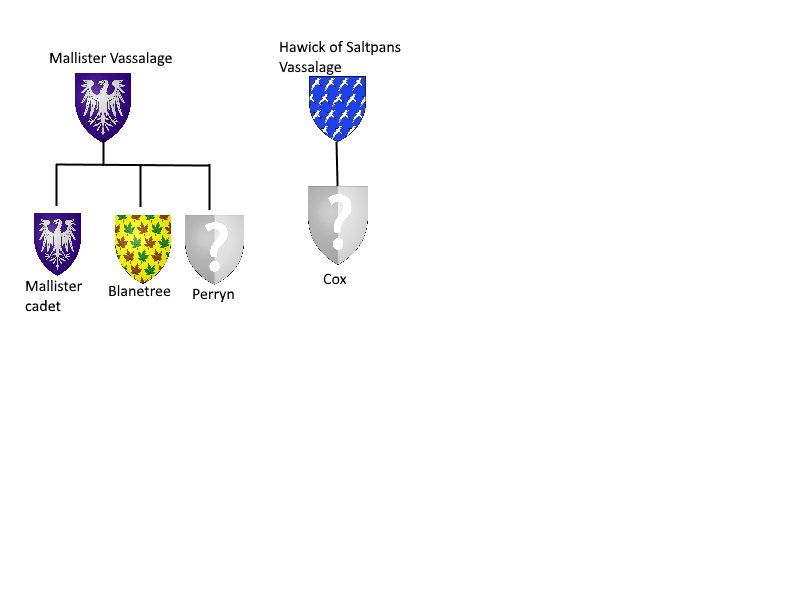