Here are my plans for the northern bank of the Blue Fork. 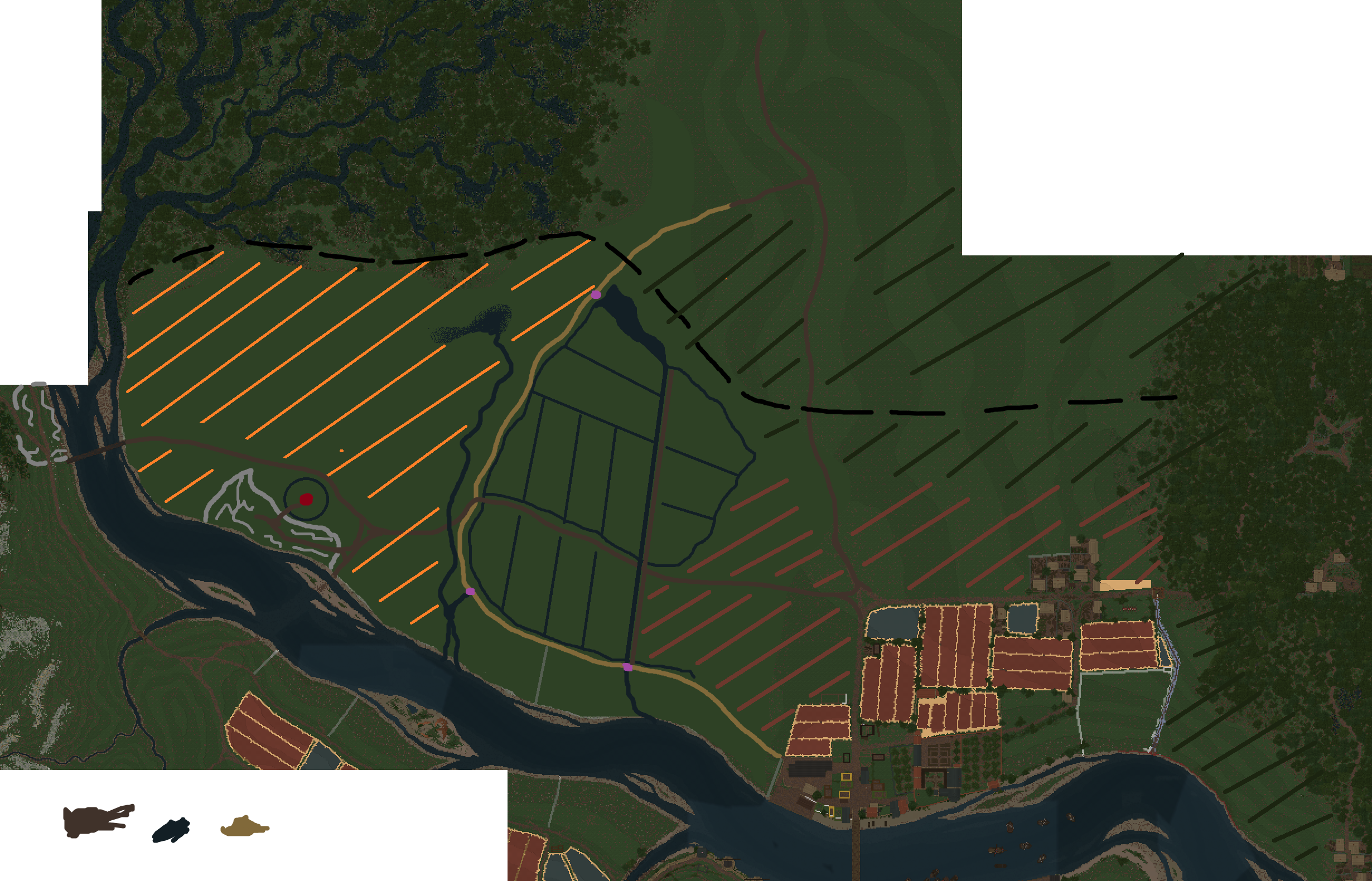 Blue is water, gold is dyke, red is holdfast, purple is pumpmill, brown are roads, green is forest, brownish-red are fields and yellow is bog/marsh/wetlands. Black dotted line is the border of area I want to be responsible for.

The idea is to recreate the fields with ditches like how Reygame started a couple of years ago, though with way smaller dykes. Mills will looks somewhat like this.

The village at Ramsford (near the red dot) is a small village with a motte castle, that looks somewhat like this picture below. (note: the mount would be higher)

The orange area would be a continuation of whatever waterscape there is at sevenstreams and hagsmire.
Last edited by a moderator: May 23, 2020
Reactions: Kor_Bro, Fin, Arkilstorm and 5 others

You're putting me in a really weird spot Estoop. (Imma be blunt in the message. I apologise in advance! )

On the one hand, I really dig the plans and I like what you've done with Fairmarket so far, on the other hand Fairmarket has become this ever-expanding black hole of time and effort on which you're constantly lamenting how it sucks you dry. Progress in the actual city has arguably been slow. Now, I understand, that if project A becomes a chore, you distract yourself with project B, and if that becomes a chore its project C and so forth.

I will not allow you to add project X to your list. What you're doing right now is procrastinating with plans. It is the highest form of procrastination, and I'm proud that you're not procrastinating by building a giant cock in test. Yet, with the amount of actual effort invested in your actual main project you might just as well be.

In addition to that, your plans quite clearly encroach on another project's lands. Per se, I am open to discussion on that especially if I can ensure regional cohesiveness, but heck I don't want a regionally cohesive toy park made of wool and gold and happy terraforming placeholders. Especially if it is roughly 1/3 to 1/2 of the size of your main project!!

So here's my proposal. Finish the town, finish the terraforming in the south and east, and then we'll talk about another extension.
Last edited: Sep 25, 2017
Reactions: Emotione11, PoziPoisonDart, EStoop and 1 other person

If I ever make it online with time to spare I'll come and help build at Fairmarket!
Reactions: EStoop and Arkilstorm

To explain, the idea was to do all soul-crushing terraforming in one go once everything was plotted out, while at the same time finishing the northern riverbank of the Blue Fork (which I couldn't finish before due to the current Ramsford sitting there).

I'll finish everything on the southern banks first before moving on.
Reactions: Thamus_Knoward

If you throw some more profession signs around on the plots I'd be happy to do some more of those too.
Reactions: EStoop and Thamus_Knoward

The town is done! I'd like to thank everyone that has helped building the town. Special thanks to Thamus and Arkil, who helped make the final push. Here are some statistics.

Up next will be the surrounding lands. Since I prefer to finish all the fields at once, I'd like to re-suggest the plans made earlier in this thread for Ramsford.
Reactions: Arkilstorm, Enah, qBBQ and 6 others

i wear my singular house with honour :3
Reactions: Wazgamer and EStoop

Time for an update! Not much has changed, but expect me to work on Fairmarket more in the near future. The reason for the slow progress lately is lack of inspiration, losing focus and absolutely hating the activities that are left to do.

The town
Still finished, have kept my paws off it like a good boy.

South-east
Mostly finished, except for a few farm interiors and details, fields and the riverbank.

West
Halfway finished. Will make a forest which will cover most of the still empty area.

Ramsford and northern Fairmarket
The hamlet itself is quite a way, though missing all interiors. Towerhouse is standing proud. However, the area around it is supposed to be swamps/wetlands, and I don't have a clue how to make it (WE knowledge consists about making selections right now). Help would be immensely appreciated.

The northern sprawl of Fairmarket is mostly finished. I still need to make some fields surrounding it, connect some forest to that of Vypren and finish the levees west of the sprawl.

The Blue Fork
Manually placing sand layers is very tiresome and therefore very slow. The southern riverbank between Ramsford and Fairmarket is finished, and I will try to give the same feel and look to the rest of the river (jagged shoreline, sandy islands and more sand).
Reactions: Emotione11, lemonbear, nubcaker and 7 others

Yay! You can do it o’ boi
Reactions: Elduwin and EStoop

Who is my other approving mod, assuming Howy is one?
Reactions: Howy

I’ll be it if you want bb
Reactions: EStoop

Yeah approved on the condition that you finish FM within the year!
Reactions: EStoop

Wazgamer said:
Yeah approved on the condition that you finish FM within the year!
Click to expand...

Figured to give another update, even though not much has happened. I have officially started my thesis two weeks ago and between that, my job and sports there isn't as much time left to craft some Westeros.

Septry
However, you might have noticed that I redid the septry on the north bank of Fairmarket. The old one can be found near parliament in test, and is up for grabs for anyone interested. Make sure to make a post about using it though, so it won't be used elsewere as well. A palette change would be appreciated, since it's still rather similar to the new septry.

Riverbanks
I had started on the riverbanks, mainly manually placing the sand layers. Since new sand layers will be included in the next block update, and said layers will match the sand I have been using at the riverbanks, I will postpone this task untill after the new blocks are published on the main server. If anyone knows how to replace the current sandlayers with the new ones without destroying the height of the sandlayers it would be greatly appreciated, since I do not. Since I do not need the riverbiome to give the sand the appropriate colour after the block update, I will change the biome of the Blue Fork to the Riverlands biome. Currently plants and trees on and along the river are (sometimes partly) a different colour than the trees in the rest of the region.

Future work
I will focus on finishing the north-east area of the septry, and the septry itself. I had made some changes to the banks of the river, including a claypit of Vypren, which I will finally fix. Although I didnt make a map, I made wool outlines in yellow which are visible ingame (dynmap doesnt show it all), indicating rough outlines of where I plan to make pastures. The rest of it will be filled with forest up to the riverbank.
Although I know the project is finished, I suggest to relocate some of the houses at Vyprenhamlet 5 to be closer to Vyprenbrickworks 2, so that the two relatively close locations become a single decentralised community along the river.

After that I will either focus on the forests south and south-west of Fairmarket, or the plans for Ramsford. For the south-western forest I am still trying to decide wether to go for a deciduous forest, a mixed forest or a coniferous forest, and all suggestions are welcome.

Edit
Also wanted to add this file here to give some insight into the behind the scenes of Fairmarket. It lists the input of builders on sheet 1, the professions in the town on sheet 2 and the trees, plants and crops that can be found in the region on sheet 3. Feel free to pirate information.
Last edited: May 8, 2018
Reactions: lemonbear, Howy, Emotione11 and 2 others