Dear Westeroscraft ... I am just linking my app for Stackhouse.

Don't just link it as our enjin representation will inevitably expire - we're just keeping it around as we're currently unable to port over our forum data from there to here.

Copy over the thread, like others have done already.

So it has been a while since last update about Stackhouse project. I know some builders has their projects done in 3 months and Me - its like half a year and still nearly nothing ... well since i am having my finals i really dont have much time... so sorry, I ll try my best... BUT! here I would like to summarize main points that happened during the past time...

Castle and surrounding area: (/warp sth)
I tryied to concentrate on castle as a primary point. And I can say that keep is nearly finished - just minor details missing. Near village is also done as fields... I predominantly consider this area as basicaly done...

​
Main Town and Scattered houses to the south: (/warp sthvillage)
Main Town is basicaly done too.. I had some upgrades of yards (cause i plotted them badly) and I am considerring adding some more Low Class houses. About Ruined Keep - Me and JackPlaysX worked on it for some time and we want to show it to some mod. Curently I am waiting for the marshes to be done so i can start planning the spot for it. Scattered houses are done also with better yards. Also in marshes there gonna be one small fisher village, which I cannot really plot now. Waiting ...

Forest and fields to the east:
Forest is taking hughe progress. I got some style into my hand and its going really good. I would also appreciate some mod to take a look at it. What makes me little unsure are the fields. I like to experiment with things and I just dont know if I am making them properly.

Quarry and Forestry village: (/warp sthham2)
First the foresters - its done. What i need is just approval and we are good...
But the problem is quarry specifically porkchompSMIN who has dissapeared and nobody is working on it... I am not sure if he is gonna go back or if i should open it for someone else...?

​
Other builds are currently innactive... I would like to again open Hamlets and Holdfasts for Application. Anyone interested in building please contact me and we will discuss our plans or directly post app here...

Thank you for your ideas, responses and tips and I hope Stackhouse will be done soon!

Hey Chep!! So glad to see some updates on this project
I've been quite inactive these past few weeks, but should progressively come back as a fully active mod!
Then I'd gladly help you, on terraform, plotting, editing, anything

Keep doing like this, and you'll see the end of it much faster than me with Uffering haha
Reactions: chep4007
A

Yea glad to see you back! I'd be happy to help out with fields if you like, making them a little more realistic and consistent.
Reactions: chep4007

I want the quarry, can i finish it?
Reactions: chep4007

We went through details and @jmc will continue current planning and finish the quarry. Thank you very much

Coop miniapp for the hf
by endymion and majic

hey chep here the app and info for that mini holdfast in Stackhouse.(it's is the one situated along that road in the east of Stackhouse)
here

here are the screenshots for the holdfast, hope its okey chep, you can give feedback here or in game and also anyone else if they have any ideas to make it better can say please. thank you

the land where it sits

Thank you guys this is just awesome...
If there will be any concerns I will discuss it with you in game... I am not sure about the wooden cymburies but that's something we can talk about, also with some other very minor details, leave it as it is now We will post here all the details and output. As I can see, you have not plotted any hamlet houses around, dont worry, that is something I was going to do myself so we can have some fun plotting I would also like to see some comment from any Mod (Andy or Iwan) for their tips ... But from me, you are guys approved
-chep
Reactions: Endymion and IMajic

Heres the app for Sthham3, hope you like it, any feedback i know there will be some

Hey @chep4007 how is this going?
Still interested in doing Stackhouse?

Since my last update nothing has really changed. I guess Jmc has finished quarry, Majic and Endy has finished planning Holdfast ...
My time-eating activity is definitely university. I have lack of time even on sleeping and that means on WC too.
Fortunatelly! I got used to new school system and i might have more time now.

I don't want to abandon Stackhouse. But I want to maybe do some redos, cause I have spotted some mistakes i had done mostly in field laying and I would like to discuss those ingame with Mod. Make it better, more to WesterosCraft standards and idea of GOT world.

So now for the points I would like to point out:

After some time I've found a minute to have a little solo revision of Stackhouse. Beside news and updates i have few questions... So lets start!

As it turned out, stackhouse borders are much wider than I thought they were here is map 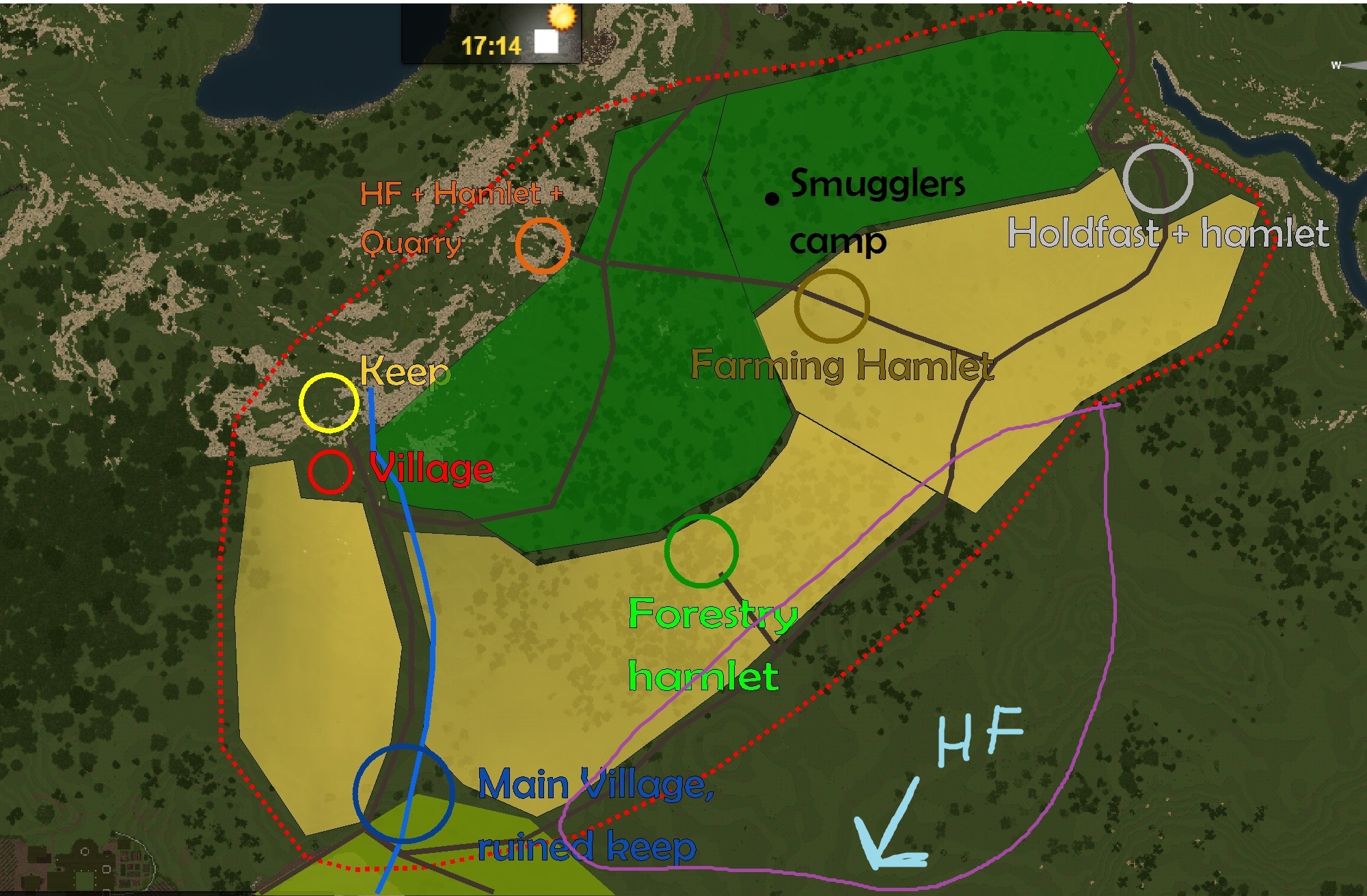 In color purple, I've marked the new area attached to Stackhouse (Whis is probaly still wider than I've marked, because Westbrook is just surrounding river). With great region comes great responsibilities and that should be another defensive possition. Not just the protection of borders, but also protection and shelter for traders on Ocean Road. According to that I suggest marking new Holdfast (marked light blue arrow) laying on Ocean Road. My plan is:
I accept any Ideas and suggestons
If anyone thinks that HF is too much, I suggest at least small Fishery/farming hamlet.

I don't exactly know if this would be nesscessary but... Do those fields need to be Redone? 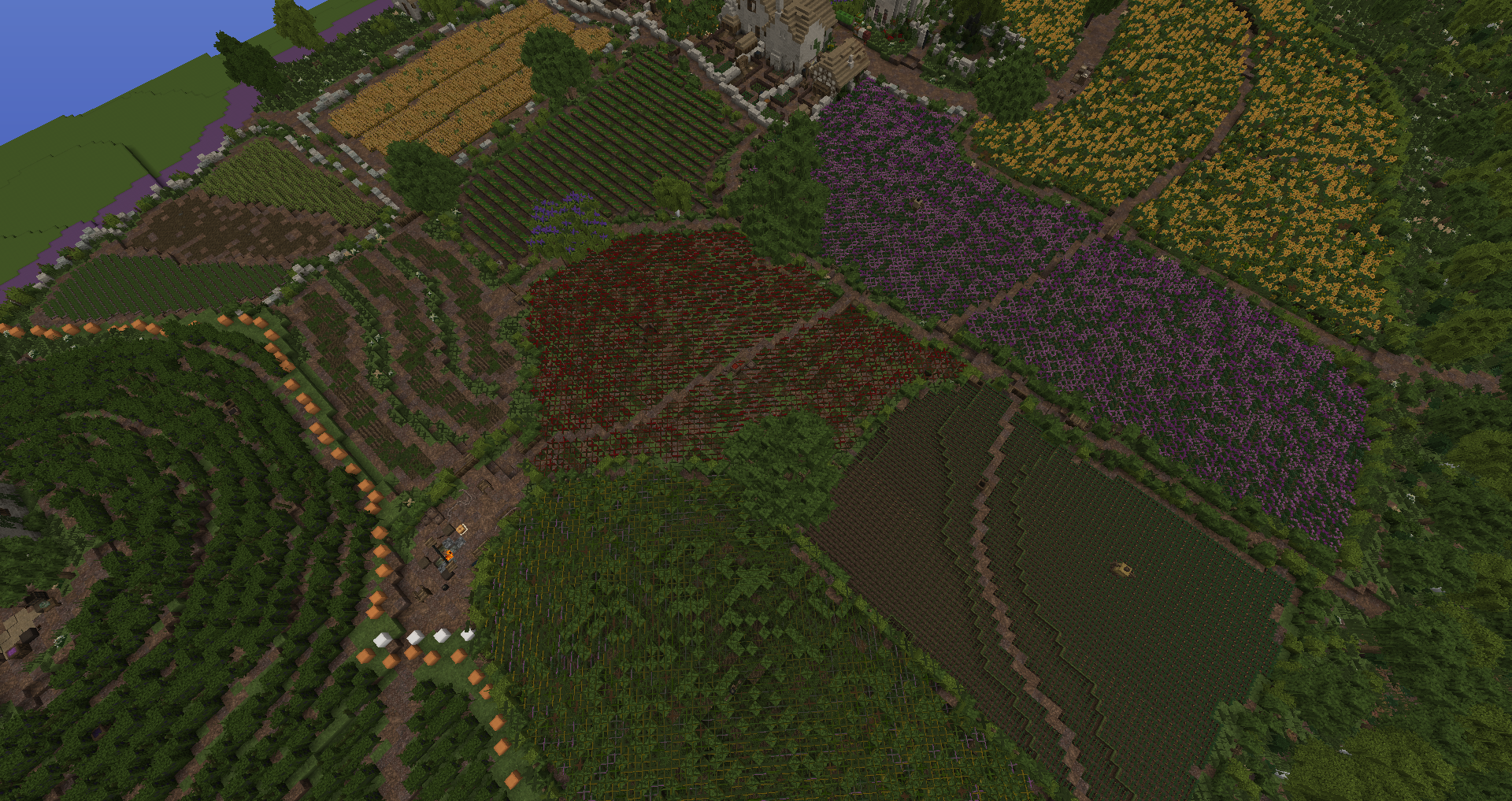 I remember someone saying that they are too bubly and unlogical (with which I probably agree) and those plants on them are not nesscessary, crops would be better... I need some advice about that. Probably discussion ingame?
For upcomming fields (northeast) I will do my best not to repeat this process and mistakes.

DONE
IN PROGRESS
NOT STARTED 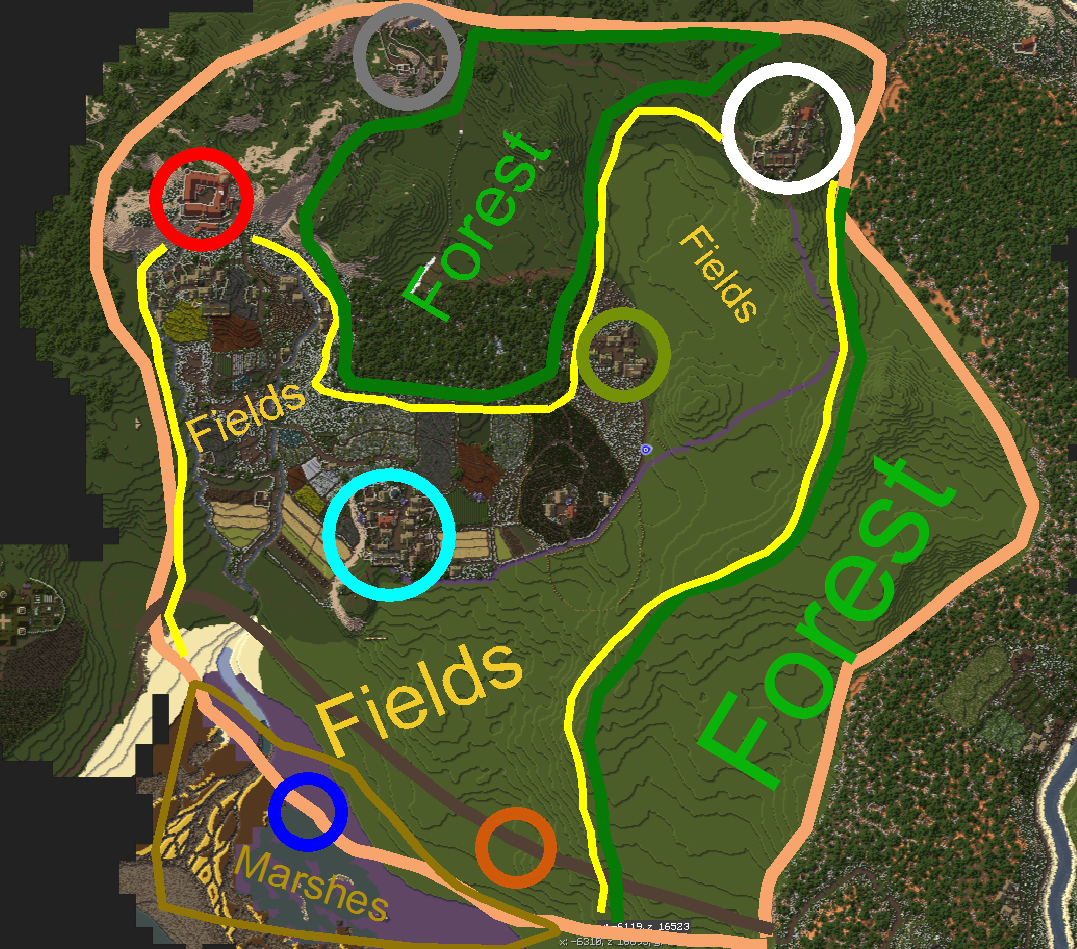 Hey @chep4007
How are you doing? Are you still interested in Stackhouse?

Fwi,
At least 1 probbie built between the winery and the village and I as probation leader approved them because I was not sure of the status of the build.

I just sent you message, I want to finish Stackhouse for once. Please lets meet and arrange further steps. Thank you

Hey chep4007 just wanted to check in and see what your plans are moving forward with Stackhouse.

Hey chep4007 another check in before this is marked as abandoned. If you intend to finish it just let us know!
You must log in or register to reply here.
Share:
Email Share Link
Top Bottom