In Progress House Sweet by Tobi

for me personally I split my projects in different zones. U can mark them with lines in the sky or do it for ur self. important is that u don’t start alle ideas at once! Take notes wich plans and ideas u have (I do it ingame with signs but u can make notes where ever u want). So basically do it step by step. I had the same problem once with lonmouth. U will get a feeling for it by time. Also what helps me was always having a area where I build and where I do tera bc sometimes u get bored of one thing so u can switch.
Jeff
Reactions: Tobi and Rexstop15
F

Tobi said:
I have a small problem.
As my ideas unwrap themselves i finished the rough terrain of sweet. But now its time for the detail and buildings. And thats were it gets problematic.
I have too many new ideas I just cant focus on one thing at a time.
So pls give me a thing to start with.
Click to expand...

Start with the roads brother. (Read in IronGiant's voice)

Rome wasn't built in a day, but the roads did help.
Reactions: IronGentleGiant, Tobi, Jeffjunior77 and 1 other person

Just to jump off this, roads are brilliant. Map out where you want them roughly. Don't worry about their exact forms yet.

However, when it comes to starting different areas, I'd say work on making the tip of the peninsula and work your way inland. do the hamlet there and its surrounds. It'll give you practice and time to work out plotting and style kinks. Also terrain practice.
Imo it's good to start a project with the less important parts so you can iron out any problems

Apologies for any formatting issues with this message, I'm typing on my phone.
Reactions: Tobi, FD001__ and Jeffjunior77

i apply for the fishingham a

t the North Coast! its alrdy in sweet since i help Tobi out with some tera!

at the beach i plan a small doc and some fishing boats.

Could you plot out the boats too?
Reactions: Jeffjunior77 and FD001__

Hey Tobi, nice to see you making progress on Sweet! I have just a few notes regarding the terra. You have a river running parallel to the coastline on a narrow strip of land. It makes more sense to have smaller streams coming from the higher elevation and being perpendicular to the coast. It would be faster for the water to go down the steeper slope to the ocean, as opposed to meandering through highlands to then circle back to the ocean. Just a note for rivers in general, they are typically in depressions in terrain, not running along a ridgeline, like it currently is. Additionally, you should watch for bifurcation, which is when a river splits in two. This would not realistically happen, as the water would take the path of least resistance, which would be one of the two paths you have marked - not both. 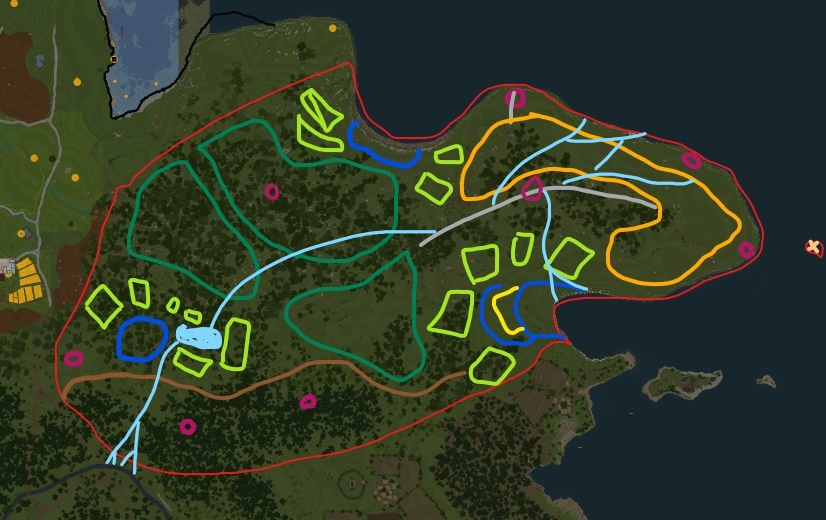 My plan was that there are many small streams towards the ocean and one "bigger" inland so that it is the only SWEET water source.
Idk if this is what you mean, so if you want draw your plan on the map.

I've melonned as well that stream near the castle with same feedback as Jake. From your map, I would just remove the stream between the ridge and the lake, and remove the various bifurcations on the streams.
Reactions: Jakethesnake8_8

I like the idea in principle, the trouble is it’s not hydrologically sound for the aforementioned reason that it seems to flow across the highest portion of the project. By sweet water, are you referring to fresh water? If so, all the streams would be fresh water, because at that slope, the fast water would push against any salt water vying to make its way inland. Therefore, the majority of the streams would be fresh water. Were the area flatter, you’d be able to get away with this plan, however looking at Sweet’s topography, it just isn’t feasible.

Sorry, I haven't had time to look at this in-game yet as I've been busy IRL. However, I had the impression that this advice would be followed rather than the original stream layouts:


Emoticone11 said:
I’ve had a chance to look over the app, and I think your plans and tests look pretty good! The only thing I’m unsure about is the hydrology. It seems like your streams are “backwards” in that they start as a single channel and then bifurcate. Natural bifurcation is pretty rare (except for deltas and such); instead you should have a bunch of smaller streams that start in a watershed area and join to form larger streams. I agree with Stan that it might be better to have the “sweetwater” originate in the hills around your lake, and then from the lake make its way over to the sweetport bay.
Click to expand...

Please avoid working on the streams any further until you've had a chance to revise the hydrology. Let me know if the feedback is unclear and I'd be happy to make a quick sketch on your map.
Reactions: AerioOndos, FD001__, Tobi and 2 others

As you said here is an update on the plotting. The top left area will be used to train troops.

Also it would help by a mile if you drew your thoughts on a map.

Tobi said:
As you said here is an update on the plotting. The top left area will be used to train troops.

Also it would help by a mile if you drew your thoughts on a map.

The town doesn't look very dense imo, would it be better if buildings were clustered along waterfront?
Reactions: Jeffjunior77 and Jakethesnake8_8

The town should have grown along the harbour and along the roads moving through the project. At the moment it feels more like they're filling space within the walls. This wouldn't really happen. Same with the troop training area. Training a household guard would be easier in unrestricted areas outside the walls. Azulejo's recent drop of Nazarreria insp on discord is a good example. It features a troop training group to the top right of the town/towns, beyond the stone walls. This gives large enough room to practice archery, cavalry manoeuvres and generally worry less about harming civilians.

I'd also expand the town area by moving the northern walls higher up the hill. Particularly to wards the end of the wharf. This way the walls will offer more protection and give you a bit more space to have yards and means of sustaining the settlement within the walls.
Reactions: Jakethesnake8_8, Tobi, Azulejo and 1 other person

Hi guys, I'm applying for the little fishing hamlet at the northern shore of Sweet. Here is my layout:

I made a quick sketch of my suggestion for the hydrology (light blue is water, grey is hills). Feel free to change up the exact placements, but the main ideas are (1) I think it's a bit more natural for the "sweetwater" creek to empty into the Sweetport bay, (2) you want the streams to merge into larger streams rather than the other way around, and (3) you should try to follow the contours of the land with your streams, i.e., flowing in the steepest unobstructed direction at any point.

Also, generally speaking, avoid the "water flowing magically from rock" sources for your streams. While there are some cases where this is appropriate (natural springs, caves), for the most part streams will just start in areas where a lot of surface runoff collects (called a watershed or drainage basin). Often these would be on the concave sides of hills, as I tried to illustrate in the sketch.

Let me know if you have any questions or other ideas.

Servus all,
i planned with Tobi an Island with a lighttower in front of the smaller "Sweet" Bay with the castle.
It is inspired by Sakhalin Island in Russia.

Let me know what you think about the position of the island
Reactions: Tobi

Do you mean something like this rocky point on Sakhalin (minus the mountains).

Huhu, Tobi and me created as a Mini a small shipyard for fishermans, boatrepairs and low budged boats.
The place lays behind the city border of Sweet Town out the bay.

I dont know if this works but i have a idea for the Lighthouse in sweet.
We could make somthing like griffins Roast just way more smaller.
Also it could be a hf what a Ligthhouse includes.
That would bring way more variation in the Tera and makes it more intressting.
Also u can see the Cliffs tests i did for the Tera and the new Low class Houses i tried.
Check it out ingame !
I used as inspiration alot of the tests we have at /warp stormlandstest.