Listen one, listen all!
Westeroscraft walks will soon be heading to White Harbor so id love to hear about any special builds that were done or backstories that can possibly be added into the video.
We will be starting in the Harbor and will then slowly make our way though the city, then to the castle. And end with the surrounding sprawl/ lands.
Reactions: Kor_Bro, Emotione11, Endymion and 2 others

Depending on how many videos you plan to make, I might actually suggest an alternate route: start in the surrounding sprawl/lands in the north, make your way to the city/castle, then exit the city at the east gate, visit the stark manse area, and then work your way south in the surrounding lands/sprawl.

I’ll draft up a more specific plan of what I mean in a bit.
Reactions: thecoddfish, Enah, Kor_Bro and 4 others

We havent put a number on it yet, it all depends on how we break it down.
Thank for the plan! we will most likely follow whatever you say as you designed/ built it, so you know what flows best
Reactions: Kor_Bro

Hey, so I realized that it might be a bit tricky to get to all of the points of interest in the sprawl in a "continuous" way, since the roads sort of come out of the city like spokes on a wheel, and you would have to backtrack to go down a different route. So I just wanted to float some options to see which one you would prefer:

1. Start in the harbour in each video. Then walk in a different direction each video, seeing a different part of the city, sprawl, and surrounding lands in each one. End at the most distant point you can go in that direction.

2. Walk a normal "continuous" route. This would probably involve a considerable amount of backtracking, possibly along the same road, to see all the points of interest, but would allow you to pick up each video where the previous one left off.

Builder
You should definitely include the quarry east of White Harbour.

there is some cool stuff below ground. the sewers and the crypts
Reactions: HardzzGaming and Thamus_Knoward

Hey @electricthrusts , did you give some thought into the options listed above? Let me know so I can work on a map!

Emotione11 said:
Hey @electricthrusts , did you give some thought into the options listed above? Let me know so I can work on a map!
Click to expand...

Hey @Emotione11 , sorry for the late response. We've decided to do the continues route starting with the sprawl to the north, we will go up the river by boat stop at seal rock then head further up the river and get off the boat at WH4 then visit the glassmaking hamlet and Greenwood then we'll go back towards the city to the shipyard and the sprawl outside the wolfsgate, there we will end the 1st part.
Next week we are on holiday so we will take a week off from WCW so you'll have some time to work out a map
Reactions: Emotione11

HardzzGaming said:
We've decided to do the continues route starting with the sprawl to the north, we will go up the river by boat stop at seal rock then head further up the river and get off the boat at WH4
Click to expand...

Do you mean starting with the sprawl to the south?

@Emotione11 I meant the north but if you feel like starting in the south (or the Harbor) would be better we can do that instead. We haven't recorded it yet so you can decide where we start

Oh I get it now, you’re taking a boat up the river, then starting in the north. I thought you were saying you were going to start in the north, take the boat, and then get off at WH4 and do all the rest lol. Yeah that sounds good, I’ll throw together a map soon.
Reactions: HardzzGaming

I may be a bit late on this, but I would love it if the salt boiling facility south of Gullsgate got featured. Further south along the shore, you'll also find some whales which are being harvested for their blubber.
Reactions: AerioOndos and HardzzGaming

Here it is, the ultimate White Harbor exploration map! 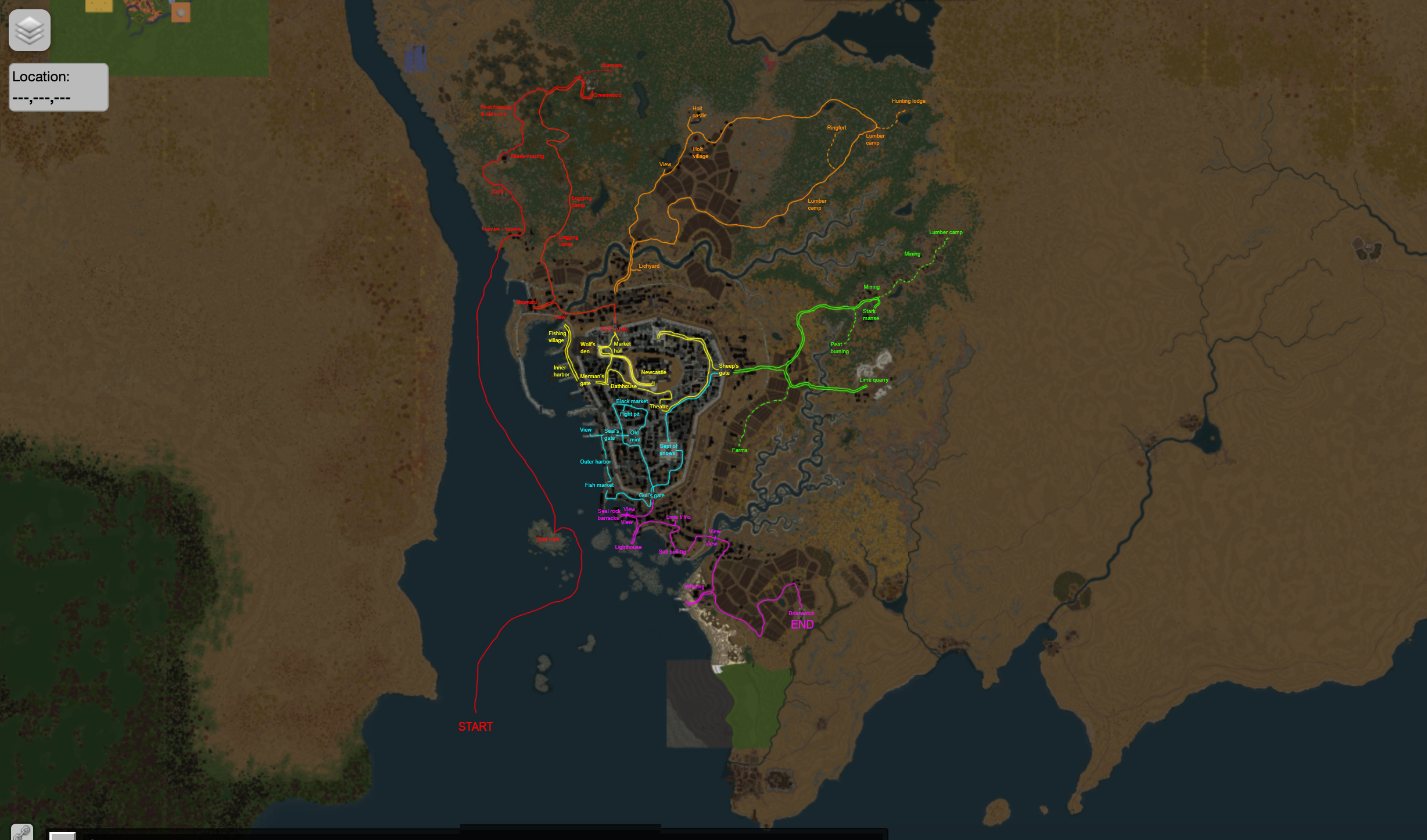 I tried to cover as many landmarks as possible while minimizing backtracking. Of course, I wasn't able to get everything, but feel free to do extra exploration of side streets and alternate paths if you have more time in the video than it takes to do the route. The differerent colors are meant to correspond to different videos (in rainbow order), but feel free to break it up however you want.

I put markers for all points of interest, as well as some spots with nice views.

The orange path corresponds to Holt lands. It would be somewhat of a detour (i.e. you'd approach the city, but then turn away from the city right before the gatehouse), and Holt is essentially a mini-project, so you might want to do that one out of order as a WCW on its own, but it's really up to you.

Let me know if you have any questions or want anything changed!
Reactions: Luk_emAn, HardzzGaming, Augurex and 8 others

Hey @Emotione11, looks good! Thanks for putting it together. We will do Holt as a separate episode at the end as a gateway to explore some more projects in the north. so next week (this weekend we are taking a week off WCW) we will pick up at the yellow path. Is there any update on the inside of the Wolf's Den or is it still WIP?
Reactions: Emotione11

I don't believe there's any update - Benpwen started working on finishing it, but I'm unsure if it'll be done in time for the walk. You'll be safe exploring the courtyards though, as long as you don't enter any actual doors.

Also, if you're going to do Holt separately as a gateway to other northern projects (Moss would be pretty natural, since Holt is right on the border - have you done a walks there yet?), I can modify the route slightly. Although I will need @lord_damascus to finish his tavern there before that will work *nudge nudge*
Reactions: HardzzGaming

Sounds good, we haven't done one on Moss yet so that would be the next stop after Holt
You must log in or register to reply here.
Share:
Email Link
Top Bottom