Game of Thrones, Clash of Kings, Storm of Swords, Feast for Crows, Dance of Dragons, Winds of Winter

I like adding purpose to the builds, i think this make everything more interesting.

Building is a passion to me, and i'm addicted to asoiaf. 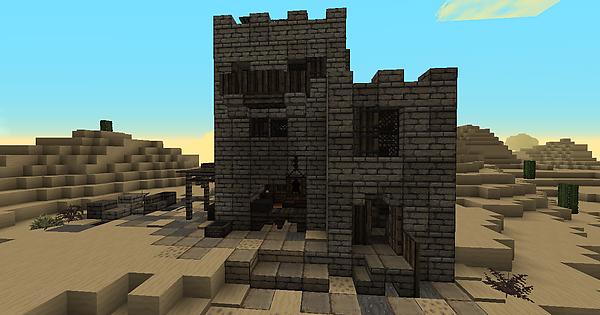 Everything seems to be alright this time.

First of all, 2 quick tips to make things easier on my end:
1. When taking pictures use /nv. This turns on night vision and removes all shades. Now I can hardly see any of the interiors.
2. Mention somewhere in the post what project style you based your house on. Dorne is a very big area and it's a bit hard to exactly pinpoint what you based it on.

Now the house. It's a solid attempt, good job. The plotting of the house nicely follows most of the styles of the older projects. I feel it would nicely fit in at hellholt. I'll give a list of things that you could have improved and could keep in mind when building your next challenge build.

Good job overall! My main advise would be: try to explore our texturepack more. We have a lot of blocks that can be used in a lot of creative ways. Look around the server to be inspired and see how some builders combine these blocks to make interiors, floors...

For your next house, take a look at /warp gaunt and build something you think would be appropriate there. Include a garden aswell.

Hey Andy, thanks for the reply.
Sorry I forgot to mention on this post about the build, I did on the wrong one .

Actually I din't follow any style on the server, but I was inspired as you said correctly from Hellholt.

I just picked some blocks and started building from memory.Thinking now, you guys have been improving the style for years, I should have looked more hahaha.

Thanks for the tips, I'm going to work on the next sap, (quarantine time not much to do xD).

Sorry for the delay, i got a bit sick, couldn't even look to a computer. ':|
Here you go :
https://imgur.com/gallery/lqouivb

Don't worry about taking your time. Hopefully you feel better already. This is already a great step up from your previous house, especially the exteriors. You'll see that the list of feedback got a bit longer, but most issues are pretty nitpicky in nature.

The exteriors would fit right in at Gaunt. My two critiques here would be that the small light stone bricks and river cobble should never touch. Always try to put at least one block of normal cobble in-between them. You'll find that most gradients have a block that divides the darker block and lighter block in the gradients. If you want to know more about gradients you could always check out /warp gradient (I think, if not just ask for the correct warp ingame ).

The garden is also pretty good. You use the space pretty well. However, I would encourage you to even put more vegetable patches in them. These gardens would be the primary food source for the inhabitants. Grass would occur mostly on the edges. When putting grass make sure that you also put plants on them. Otherwise, it's a bit boring and flat.

I feel the interior is the part you still struggle the most with. While they are by no means bad, they are not quite up to standards yet. I am one of the biggest supporters of a good support beam in the roof and you've probably seen quite a lot in Gaunt, but here I feel the house is too small to warrant one. It makes the house feel a bit cramped. Leaving the space open would open up the area and make it feel less claustrophobic. I love that you put in an elevated area to sleep on. I would remove the wattle and put the ladder in front, instead of having a hole in the floor for it. I would also make the ladder fully wooden, since rope would be a bit tricky to climb. I would switch the position of the table and kitchen so the table is in the centre. You don't need to divide the house into sections walled off by a high kitchen counter. Leave it open as much as possible, as if it's one big living room. I would also simplify the kitchen design a bit. We rarely use the hanging cabinets/high shelve designs anymore.

This was quite lengthy, but do not feel discouraged. You did great on this one. For you last challenge, make a middle class baker in the fairmarket style. The focus here will be the on the interiors. The middle class can afford more furniture and rooms, but don't go overboard with them. Give it your best shot!

Hey man , thanks a lot for the review, i wasn't quite happy with the interior on this one too, i struggle alot with interiors on diagonal buildings, quite hard task.

But i have a questions about the ladder thing, i wanted to put the ladder on the front as you said, but it wans't functional, (you cound't actually climb it to the upstairs) so i put it in the back, because its was the only place it worked. So should i always not care for functionaly and only care for the better look ?

Thanks for the time.

VoxerBr said:
Hey man , thanks a lot for the review, i wasn't quite happy with the interior on this one too, i struggle alot with interiors on diagonal buildings, quite hard task.

But i have a questions about the ladder thing, i wanted to put the ladder on the front as you said, but it wans't functional, (you cound't actually climb it to the upstairs) so i put it in the back, because its was the only place it worked. So should i always not care for functionaly and only care for the better look ?

If you remove the beam, it should have been possible. I usually try to find a balance between pretty and functional.
Reactions: VoxerBr

Loved the challenge, such a cool style, Fairmarket gives me so much vibes from Oxenfurt city in The witcher 3.

Hey
Nice to see you've improved again! I'll just give some short bullet points as feedback, since there is not that much to comment on this theme. The extras are good. The only thing I would change it is the stair supports under the roof on the side. They are quite bulky. The garden fits FM.

Ints:
That's it! When you see a mod you can ask them to make you probe again. Don't forget to read the probie guide. It might be helpful, although you're pretty familiar with the probation process already. I'd encourage you to do the full month, but as said before you have the option to become a full builder after five houses, if the probationleader agrees. Nice work and welcome to the team again.
You must log in or register to reply here.
Share:
Email Link
Top Bottom