You are using an out of date browser. It may not display this or other websites correctly.
You should upgrade or use an alternative browser.
X

I was looking for an ASOIAF mod for minecraft so I could use it on my singleplayer world, and found this mod. Then I watched some showcases of the builds on the Westeroscraft Youtube channel.

Lord of the Rings, Warhammer Fantasy, all that good stuff.

Game of Thrones, Clash of Kings

In the timeline of the WOTFK: Tywin Lannister. Dude is commanding AF. It's pretty evident from early on what kind of man Tywin Lannister is. When you learn about the Rains of Castamere it doesn't even come as a surprise, it's like "yeah that makes sense", can't say that about a man like Mace Tyrell.

Favourite quote from him is: "Joffrey, when your enemies defy you, you must serve them steel and fire. When they go to their knees, however, you must help them back to their feet. Elsewise no man will ever bend the knee to you. And any man who must say 'I am the king' is no true king at all." He truly is The Great Lion. Also he has sick sideburns.

My favourite part of building is the small details. It's the small things that counts when building. I can bring that attention to detail that makes a build feel alive onto the server. I'm not great at massive builds like castles and keeps, but i like to think I'm pretty good at houses and stores etc.

ASOIAF would have to be my favourite fantasy series of all time, even though I'm only up to ASOS book-wise I have watched the entirety of the show, watched countless videos on youtube about the lore behind Planetos, and I have about 600 hours of playing the Game of Thrones mod for Crusader Kings 2. I love ASOIAF.

When I was looking for a ASOIAF mod for minecraft I was planning on making some of the major builds myself, but then when I saw Westeroscrsaft and how much every single build blows any of my builds way out of the park. I got onto the server and started exploring, checking out the major builds, the minor castles and villages etc. Not only that, other people on the server seemed pretty chill, it was obvious you could strike up some good convos. I was using Westeroscraft as inspiration for my own world, trying to make medieval builds.

I want to help in this massive project. Pretty please?

YOU KNOW NOTHING, JON SNOW

Hey Garfield,
Thanks for your application, we're always eager to get another pair of hands to help us finish this ting.

Your app shows a lot of potential, it's clear you've put some thought into the house, I'll give you some general notes about our general style/tips that should help with future builds.

- The overall mix of blocks is nice and similar to what you might see in some locals in the North. The daub looks nice and symmetrical, but we generally try to give a low class houses like this just one stone color mix. E.g You could just use the grey cobblestone for the chimney (that red brick isn't used very much in general).

- With a house of a larger size like this, we'd also generally make the second level a full story to the house (rather than the small balcony you have along the edge and the big empty space in the middle.

- You've done a nice job with the thatch roof, we usually try to make sure to add wooden stair/half door rafters beneath the thatch/slate roofs to cover them up from beneath. The general rule of thumb is to try your best to make sure the exterior roof block (be it thatch, wood or slate) isn't visible from inside the house. E.g. below

- With the ground mix, just dirt/gravel is fine, it's a sad house that has grass growing beneath the dinner table.

- Unlike with regular minecraft, we generally don't use regular torches too much, just a candle or two on a table would be enough for most buildings.

If you haven't taken a look yet, this page has some more points and examples that will help on future builds.
https://forum.westeroscraft.com/wiki/basic-building-guide-for-applicants/

For the first challenge build, please make a Low Class Farmer's house in the style of /warp hawthornetown and share screenshots of it in this thread. Take note of commonalities between the houses (block mix, shape of roof, size of house, interior blocks). Please take your time to study the style in detail, and make sure to ask if you have any questions on the above feedback or the hawthornetown style.

- On this next house it would be helpful if you could take some pics of the yard as well.

Thanks for looking at my previous build and giving the feedback that you did. I've taken what you said into account for the next build in the style of Hawthorne. Please give me any more feedback that you feel is needed! Cheers mate! 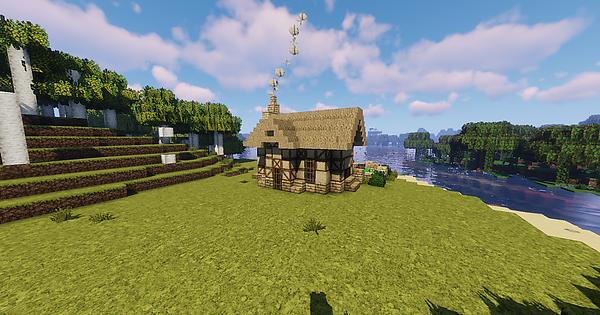 Imgur: The magic of the Internet

- Overall the look and feel of the house is good and in line with the Hawthorne style, the daub is good and you've used the right block mix.
- Just in regards to the roof, you'll be able to add a few more blocks to it to match the bell shape of the Hawthorne houses, see below.

- The chimney is also probably a little wide, a small house like this would generally just need to be 1 or 2 blocks wide.

- The yard details are looking good, i like the vegetables and washing - just in regards to the shape, usually on the server we avoid what are called "bubble walls", where the walls form a sort of shapeless "bubble" around the house. It's better to stick with straight lines for the most part (these can be diagonal ofc), and create shapes which align with the buildings in a way which makes sense and looks good.

Overall though you're making good progress. For your next challenge, please build a middle class house in the style of /warp whsprawl. Houses in large towns will usually have a profession on their on the ground floor, take a look at the styleguide at the /warp oldstyleguides and the finished houses in the White Harbor area for inspiration, and give the house some kind of profession that would make sense in White Harbor (e.g. carpenter/cooper/blacksmith/boat builder, netmaker etc).

Guest
hey Cash,
Thanks for the reply. I'm looking through whsprawl and im finding lower class builds, i can't find any netters/blacksmiths etc. I've made a house in the style of whiteharbour as in within the walls of the city, is that what you meant or not?

If so here is the imgur link: 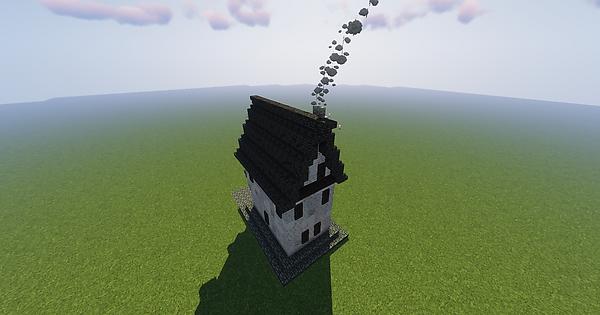 Discover the magic of the internet at Imgur, a community powered entertainment destination. Lift your spirits with funny jokes, trending memes, entertaining gifs, inspiring stories, viral videos, and so much more.

Hey Garfield,
All good, thanks for having a go anyway, you've done a great job with this one.

There's not a lot of feedback I can give, this is a nice candle maker!

Only small point I would suggest is to rotate the direction the floorboards are running, so that they cross the shortest span of the house

For your (tentatively last) challenge, please build a middle class house in the style of Highgarden, (take a look at /warp hgtown ). As with this White Harbor house, it should have a profession/business on the bottom level e.g. carpenter/merchant/blacksmith, and a yard would be great as well.

Guest
Hey Cash thanks for the reply and critique,

Got my last entry here: Blacksmith in the style of Highgarden 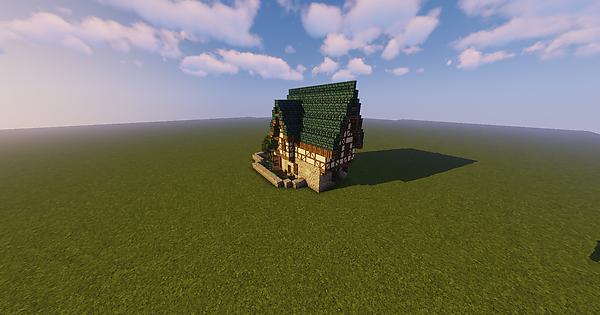 Discover the magic of the internet at Imgur, a community powered entertainment destination. Lift your spirits with funny jokes, trending memes, entertaining gifs, inspiring stories, viral videos, and so much more.

Hey Garfield, great work. My only tiny tiny notes would be to avoid using the beetroot blocks for crops (we haven't retextured them, so they still look a bit radioactive) and that I think you'll find that the houses in HG actually have black slate roofs rather than blue (we get them mixed up all the time).

I think at this point you'll learn more from being an actual builder, so consider yourself approved!

The next step is to ask a mod to promote you to builder in game and make a probation thread in the probation forum. You can start building at any open location with available plots on the server - you can find a list of these at /warp build, although it's sometimes outdated, so I would also recommend just asking people in-game and checking the forums for recent project happenings.

A probie leader should post on your thread within a week or so and continue to give you constructive feedback on your houses for the next month (and help be your entrypoint into the server community in general), although as sometimes the probie leaders are busy IRL you may need to be patient while they find the time to respond to you. But message me again if a probie leader hasn't contacted you within two weeks, or if they're taking a while to respond. I would also encourage you to seek feedback from project leaders and other builders/mods. At the end, you'll be made full builder assuming everything goes smoothly.

I'd suggest you also start thinking about what projects you might like to work on, we encourage new builders to first work on "mini-projects" which are small one off areas of other projects, e.g. a hamlet, mill, quarry, and flagged as open for mini-apps by the project leader. Once you've done a few of these you'll be able to apply for a full project.

Make sure to stay in touch and let us know if there's any way we can keep you busy.

And now your watch begins - welcome to the team and I'll see you in Westeros!
Reactions: xDaddy_Garfieldx
You must log in or register to reply here.
Share:
Email Share Link
Top Bottom