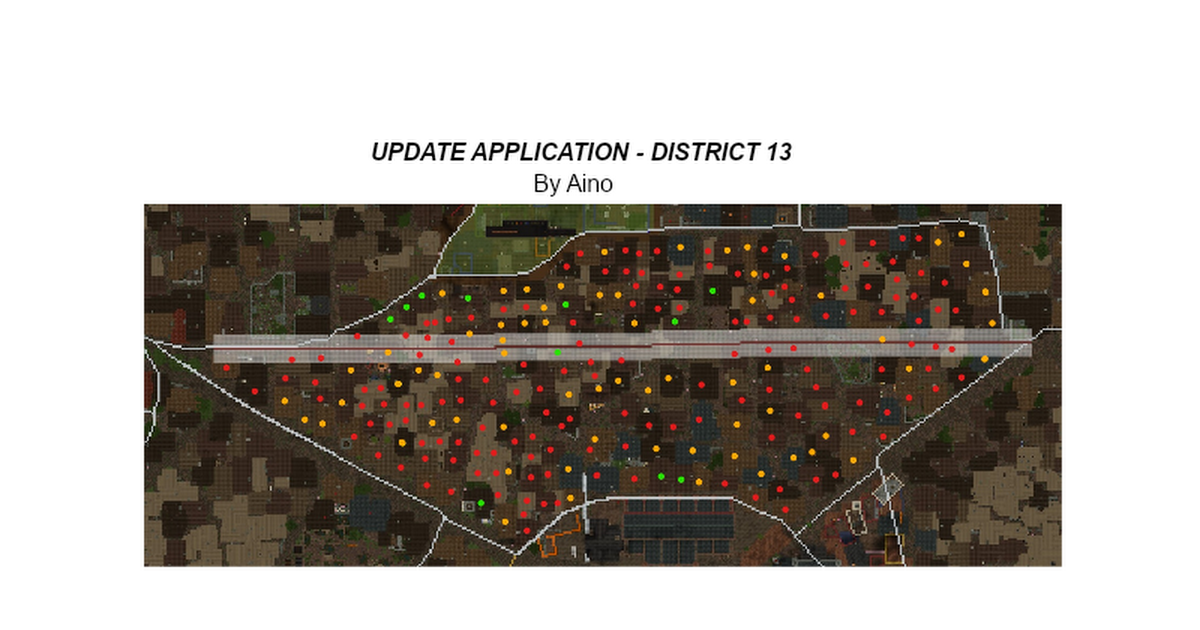 UPDATE APPLICATION - DISTRICT 13 By Aino Kl13 hints itself as an unique and interesting challenge within the grand scope of the Kings Landing Update. Despite no cannon structures and only partial...

Nice app, your tests and plans both look pretty good! I have some feedback and questions that I think you should elaborate further on:

- The district is on the larger side; do you have any concrete plans to split the work up into phases? Could you indicate those in the application?

- The low-class tests feel a bit too similar to the second middle-class tests in terms of intricacy, height, and decoration. I'd recommend having a more basic poor peasant style (no more than two storeys) as well. Also, for both the low-class and middle-class tests, you might want to have variants which are a bit simpler in terms of architectural details. The ones you have currently will work well for the main street, but could be too busy/overwhelming for all the small side streets.

- I'm wondering what your specific plans are for the two "unesco" builds that lie in the way of the new road. I'm thinking that the auction hall might be able to stay where it is; perhaps a small square can be formed there along the new road. And where are you planning to move the silent sisters' complex?

- It looks like the easternmost part of your district intersects with the Street of Silk, and contains a couple of the brothels. I'm wondering if it might be better to re-draw the district slightly so those brothels are included in KL6 instead, so whoever does the Street of Silk can do the houses on both sides of the street and ensure a consistent style. What do you think? Otherwise, you'll need to include some tests showing how you plan to do the transition to that style.

- Could you list all of the special builds that you plan to open up for forum applications?
Reactions: SseriousBusiness, Scubooty, Ric and 3 others

Thank you for responding!

So, my current plan is to spilt the building into roughly four stages, the first starting with the section north of the main road, along the border with KL4, followed by a similar section to the south, then to the east, and finally the west. I chose to do it this way because most of the work that side of KL4 is already done and having a greater sense of completeness there would be nice.

On the two Unesco builds along the main road, for the auction hall, I have two ideas in mind that really depends on what I think will work best when I get around to plotting everything. The first idea is to expand the square that is already there and to adjust it to fit the new road, and the other is to move the square, with the auction hall, to the south, closer to the market hall. Though I have quite a few ideas on how to make it work, I have concerns that a square, especially one that is not very large, would look awkward on a large, straight road like this. If I cant make the square work in its current location, I plan on moving it further south, away from the main road. The inn, which is in the same square as the auction hall, will continue to be in the same square.

On the silent sisters complex, only a tiny sliver of it is actually within KL13, with a wall of the garden poking one block onto where the new road is planned, as far as I am concerned, exactly how this building is moved/adjusted is up to whomever applies for KL12. As it currently stands, the building is not in the way of anything, and poses no problem to KL13's progress. Its location may prove to be somewhat visually awkward once everything is said and done, but again I do not think that is up to me to say.

After a lot of thought and asking others for their take, I think it would be for the best if the street of silk was cut out KL13. I do not think it would be fair for someone who would only do a small section of the street of silk to set precedent on how it is to be updated, that should either be left to whomever applies for KL6, or be publicly discussed in its own forum thread by the community at large.

The special builds in KL13 that will be open for testing are the dyeing complex, the two unesco inns, one on the square and one along the road between dragonsquare and cobblers square, a city guard building, the auction hall, and a large lychyard. It is possible that I will end up doing the dyeing complex and/or the lychyard myself, or cooping with another builder.

New tests and other stuff in link below:

These details sound good to me! Your newer house tests look nice as well.

Somehow I missed that the silent sister complex lies just outside of your district. What you said makes sense then; I'm just worried about the possibility of missing a potentially better relocation of that building, with the new road going in. Of course, it could also be fine where it is, with the new road going right by it. I think this can be ironed out more once you start working on the new road; the possibility always exists of expanding your district slightly to include that building if it ends up posing an issue.

I also agree with leaving out the Street of Silk buildings. Let me know what you think the new boundary should be, and I can re-draw the district lines.

You have my approval!
Reactions: SseriousBusiness, AerioOndos, Ric and 3 others

kk, parts of KL13 are now open for building, remember to read all the signs

I also need a mod to move the warp to where the signs are
Reactions: AerioOndos, Ric, Flip90 and 1 other person

i left fb on your test

I forgot to mention this earlier because im a very organized and proactive person but there are two High Class houses open for testing along the main street and near the square.
Reactions: SseriousBusiness, ItsPabs, DutchGuard and 2 others

Here I send to you, some images of the new tests i dis for the wine seller manse,

you can see them in my plot.

Hello, so a number of plots have been opened but in the south and southwest of kl13, I have changed the rules so that anyone can build at any plot and any time like they would in a typical project, as long as it doesn’t require a test beforehand. The new plots are marked with gold blocks, please read the instructions on the plot if the plot indeed has instructions. As mentioned, there are also a lot of things open for testing, and I will make a post about some of them in greater detail at a later time. Have fun building
Reactions: jmcmarq, Azulejo, RavishMeRed and 2 others

Builder
Already let you know about this ingame but since it's finished I'll post it here with an image to mark. A test for the stables, accessible at my plot.