Ah yes, another inspo thread by Azulejo, who would've thought


Dolmens are megalithic tombs build during the Neolithic. As many of you may already know, dolmens are chambers with or without an access corridor build with very large stone slabs, covered by an earth mound.​


Their use continued way after the beliefs that impulsed their construction ended, as it's quite common that a sacred place remains sacred over type, chaging use and meaning. This is what happen, for example, at the Iglesia de la Santa Cruz (Church of the Holy Cross) in Cangas de Onís, Asturias (Spain). Yay! promoting my region!

It was built in 737 by Favila, second king of the Kingom of Asturias, and his wife Froiluba, to store the wood cross that Pelayo (father of Favila) used at the battle of Covadonga (remember this is a highly debated episode, traditionally it's belived to be the "start" of the "Reconquista"), converted later into the Cruz de la Vicoria. At this time, Cangas de Onís (very close to the battle location) was the court seat. The chosen spot was an artifical mound that, you guessed it, was an old dolmen. Over the centuries the church has changed quite a bit.

The church is both a relic storage and a sacred burial place, as both Favila and Froiluba are buried here. This is key, as shows how the original use of the dolmen remained over time. They were aware of the former "holiness" of the structure, as in the founding stone it is said that "now, under the Holy Cross [the place] resurges".​

Left, view of the front and back of the Iglesia de la Santa Cruz. Right, hole at the church interior that allows to see the dolmen structure

Despite this, the mound of dolmens isn't always preserved. As an artifcial accumulation of earth and stones, if unkept weather and time may easily destoy it. That's why many of the dolmens we see today are exposed to the air (that and the XIX century archaeologists, who went directly for the stones).

This does not prevent the reusage of this structures, as can be seen in the second example I bring, the Anta de Pavia. The anta (a way of calling dolmens in portuguese) is located in the town of Pavia, in Évora, Portugal. Nowdays now as the Capela de São Dinis (Saint Dinis chapel). In the XVII century it was transformed into a Christian temple, turning the old dolmen chamber into the core of the building.

Some views of the Anta de Pavia

I think these two examples (the ones I know, I'm sure there's more all around the world) are great inspiration for septs all over Westeros build in former First Men (or even Children of the Forest) stuff. Anta de Pavia may be hard to translate ingame, as there isn't an esay way to represent big stone slabs without the blocks blending in with each other and looking like a blob of stone (but there are already many examples of dolmens all over the server, so I'm sure it isn't imposible).

Amazing idea!! I knew about that church but I never thought about it for the server ahah. I think I’ll steal this idea for Starpike OwO by right of nationality . And just a note, Dinis doesn’t translate to Dyonisios we have that word Dionisio, Dinis is a Portuguese name so no need for translation
Last edited: Feb 27, 2021
Reactions: Azulejo and Ric

SseriousBusiness said:
I knew about that church but I never thought about it for the server ahah.
Click to expand...

I had a wonderful Neolithic and Metal Ages in the Iberian Peninsula teacher who actually taught us about the whole Peninsula (god is it hard to find one like this) and she showed it in class. I thought you all will love it.


SseriousBusiness said:
I think I’ll steal this idea for Starpike OwO by right of nationality
Click to expand...

Pleaseee go for it! Feel free to steal as much as you like.


SseriousBusiness said:
And just a note, Dinis doesn’t translate to Dyonisios we have that word Dionisio, Dinis is a Portuguese name so no need for translation
Click to expand...

My bad, I just searched for that saint and translated it. I'll fix it.
Reactions: SseriousBusiness and Ric

We have something similar in Crete, btw...
The church of Saint Ioasaph? I think he's called? It has been dug out inside a monolithic stone. Apparently the man made "cave" pre-existed the church... 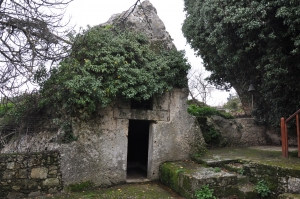 Learn about the Church of Saint Joasaph at Agios Thomas, Crete