Guest
Ignore my nobuild tag, I swear I'm a builder. 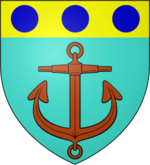 HOUSE MELCOLM OF OLD ANCHOR
An original Emileld(tm) application​
Introduction:
I am glad to present to you, after months of inactivity and a comeback, my application for House Melcolm of Old Anchor. I aspire to, through this build, contribute in making the Vale Great Again (c). Before you ask -- Gallowsgrey. Well, Gallowsgrey has been abandonned for over a year, and considering that I would have to update it thoroughly if I were to continue it now, I wish to make a different build before going back to it. So, I hope you enjoy this application!

Resumé:
Completed: Feastfires and Stonehedge.
Abandonned (to be continued one day): Gallowsgrey.

- House Melcolm of Old Anchor is a noble house from Old Anchor in the Vale. It is one of the principal houses sworn to House Arryn.[1] According to semi-canon sources, they blazon their arms with a rusty anchor on turquoise beneath yellow chief with three blue plates.[2]
- Old Anchor is the seat of House Melcolm in the Vale of Arryn. It is located east of Ironoaks where a river flows into the narrow sea. Longbow Hall is to the north and Runestone is to the south across a bay of the narrow sea.
Click to expand...

About the Vale of Arryn...

- The Vale is located on the eastern shore of Westeros, a land of fertile soil, rivers, and lakes, protected by its largely impassable Mountains of the Moon.
- The fertile lands within the valley include Ironoaks, Old Anchor, Redfort, and a peninsula containing the city of Gulltown and Runestone.
- Wheat, corn, and barley is grown in the Vale. Not even in Highgarden do the pumpkins grow any larger nor is the fruit any sweeter.
- The Vale was where the Andals landed when they began their invasion of Westeros. Rather than unite against the newcomers, many of the First Men rulers sought alliances with the Andals, often with disastrous results.[14] House Arryn claimed the Vale after defeating the First Men in the Battle of the Seven Stars.[14] As such, the Arryns are one of the oldest lines of Andal nobility in the Seven Kingdoms. The Arryns ruled as Kings of Mountain and Vale for approximately six thousand years. Those First Men who did not accept Andal rule fled into the Mountains of the Moon, becoming the mountain clans.
Click to expand...

Quotes from the books...

- It stretched before them to the misty east, a tranquil land of rich black soil, wide slow-moving rivers, and hundreds of small lakes that shone like mirrors in the sun, protected on all sides by its sheltering peaks.
Click to expand... 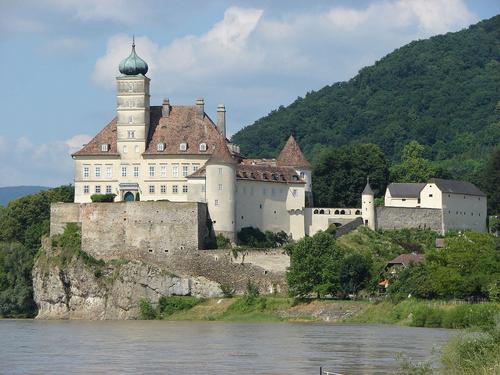 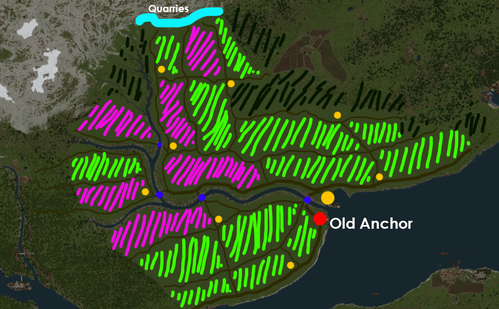 Key: Red = Old Anchor, Big Orange = Town&Port, Small Oranges= Manors+Septs+Mill&Shit, Blues = River crossing, Light Blue = Quarries, Green = Fields&Pastures, Purple = Orchards+Grapes(wine), Black = Forest for hunting.
My plans are quite straightforward; make the lands of Old Anchor fit with the books' description of the Vale, rather than the somewhat forested wasteland it is right now. This includes the terraforming of the river and of the coasts, as well as of the lands (to raise them a bit so I can have the river be lower than the rest of the lands). Most of the coast will become cliffs or hilly, as befitting of an estuary, while the mountains will be reworked to be more forested and to include quarries. For the inhabited lands, I intend to use a variance of the seigneurial system, with the settlements being a knight's manor with a sept and utilities used by all the local villagers, the houses being more dispersed in the fields and being occupied by multiple families at once for safety, as shown on this picture:

Do consider that I won't make it as square or rectangular than on the picture; it will be different, but the principle remains the same.

All are available for review on my plot's last floor at /warp emileld. The idea is that the bergfried is the original keep of the castle, and that the belltower and the lord's residence were newer additions to the castle (and will thus have a cleaner gradient, as well as better interiors). I do not intend to have any godswood, as I consider House Melcolm to be an Andal one (as although their seat is "Old Anchor", the Melcolm a not mentionned in any chronicles of the invasion of the Vale by the Andals), so in lieu of one I will have a nice garden.
The main settlement, the town, will be of decent side, with a port hosting some boats. It is the only place where the middle-class house will be used, the rest will use low-class houses (no such thing as a middle class peasant!).

Terraforming:
As mentionned above, terraforming will be substantial; I have e-lite and Fin has kindly offered to lend me some help when need be, but I would also be open to help from others.

Do tell me if I forgot anything, and thanks for reading!
Last edited: Mar 6, 2018
Reactions: Ben, Fin, Elduwin and 7 others

The plans seem very nice, and I love the tests! Before I approve it though, could you elaborate a little bit more on the map? You seem to have grouped settlements together as orange dots. How many of them will be manors+septs, as opposed to things like mills and hamlets? It seems like there's a lot of those areas for them all to be manors. Also, what's the rough size (in terms of approximate house count) you're considering for the town?
Reactions: Elduwin, Wazgamer and Emileld

Here is a new map: 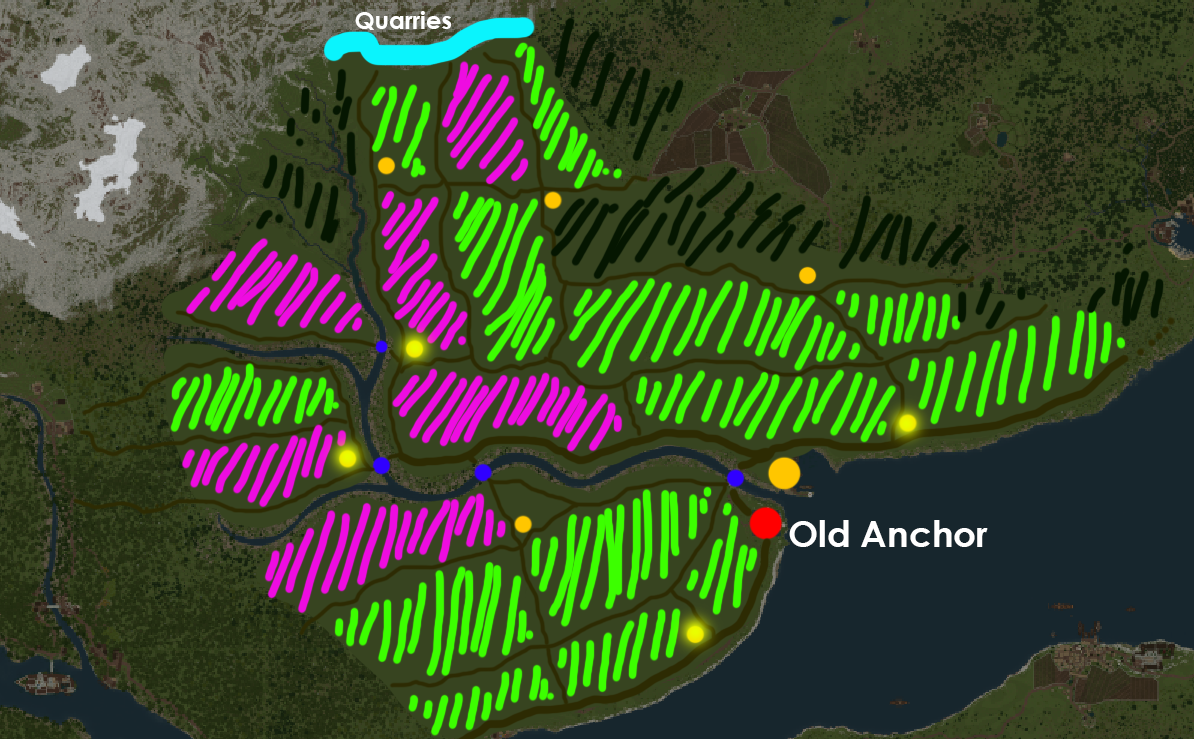 The yellow dots I added represent the manors and septs (one of them on the river will have a mill too); the orange are mills; there won't be any hamlet per say, only maybe 3-5 houses around the mill, the rest of the houses will be spread out. As for the town, it will be 20-25 houses, including a septry, with enough docks to host maybe 2-3 Arryn ships. My concept for the town would be that it used to be a relatively important port before Gulltown, so there will be unused docks in a state of disrepair, as well as the hollow shell/ruins of a former palissade or wall around the town in the fields (barely visible, as most of its materials would have been reused elsewhere).

Thanks a lot for the feedback!
Reactions: Ben, Emoticone11 and Fin

Sounds good to me. Maybe an old portmaster's house or similar on the docks could be used to emphasise Old Anchor's context - up to you tho. Approved.
Reactions: Elduwin and Emileld

Guest
Thanks a lot guys, and good idea Howy, I'll do that.
So now I just have to wait for Pizza?

I think Pizza's still away at coding bootcamp or something, so I'll pizzapprove in his place.
Reactions: Wazgamer, Elduwin and Emileld