MorrisMos said:
Here is my application. Any feedback or suggestions are appreciated.

ZeRamenGuy said:
I am definitely a fan of this app! The drawings in the app are incredible, first of all. The squarish shape of the keep has exactly the type of Iron Islands-mixed-with-Reach vibe that I want the Shield Islands to have.

Having 2 inns, 2 taverns, and 2 brothels seems a bit much, when you consider that most of the travelers going through the area would probably make their stay at Lord Hewett's Town instead of Grimston. Instead of having 2 of each of those, you could have only one of each, and then have some shipwrights to get the house number back up to 45. On a side note, the town tanner would probably also be the one who sells the leather, so a separate tanner and leather seller may be redundant.

In my "Shield Islands Command Center" floating above Lord Hewett's Town, I have various lists that could be helpful to you. For example I have divided up the 30-something longships that the Shields control between each of the houses. The Grimms have longships on their banner, so I gave them the largest portion, 12 longships. It should also be noted that the Shield Island longships are meant to be a bit different from the Ironborn longships, the size being the main difference. I want to keep the Shields' longships historically accurate in size, and thus being between 20-40 blocks in size. I have an example of a larger-end longship floating about Lord Hewett's Town for you to check out if you want.

Each Shield probably needs its own site for ship construction and repair, whether it be like the basic ones at Lordsport or something a bit more complex. I should also mention the bit of canon about the Shield fleets that I managed to miss (credit to TheDesertFox202 for pointing this out): The Lords of the shields store their longships in moss-covered pens. Make of that what you will. These stone pens could be a walled-off patch of beach, or a berth closed off with a chain or rope, etc.

We just so happened to have picked out identical castle palettes, but our house styles differ quite a bit. I would recommend using houses similar to the smaller house tests on my plot.

As far as the contrast between the castle stone and the terrain set goes: if this turns out to be a big enough issue, changing the terrain set to Reach or maybe even Eastern Islands (since it's grey) could be feasible, with input from Carc and other mods. I don't think the contrast is much of a problem, personally, (e.g. Blackhaven and Stonehelm look fine on top of the Stormlands terrain.)

Also, make sure the crops and flora are similar to those on Oakenshield, and those listed in the 'Command Center'. This would mostly apply to the forest you have in the center of the island. At /warp osruins I have a sign that has tree types I used in the forest (most of them at least).

I'd be willing to do the basic editing you'll need, as well as the forests (and maybe fields) for you, just so their style is consistent across the islands, but this would all be pending permission from moderators.

As de facto overlord of the Shield Islands, you have my approval, for what it's worth.

P.S. Seeing that someone has finally applied for another Shield Island really made my day.
Click to expand...

MorrisMos said:
As i have finished my holdfast, (though the build isn't complete) i thought i would give a more detailed map of how i imagine Greyshield to appear whilst i wait for others to complete the plots i have laid out in my mini build. 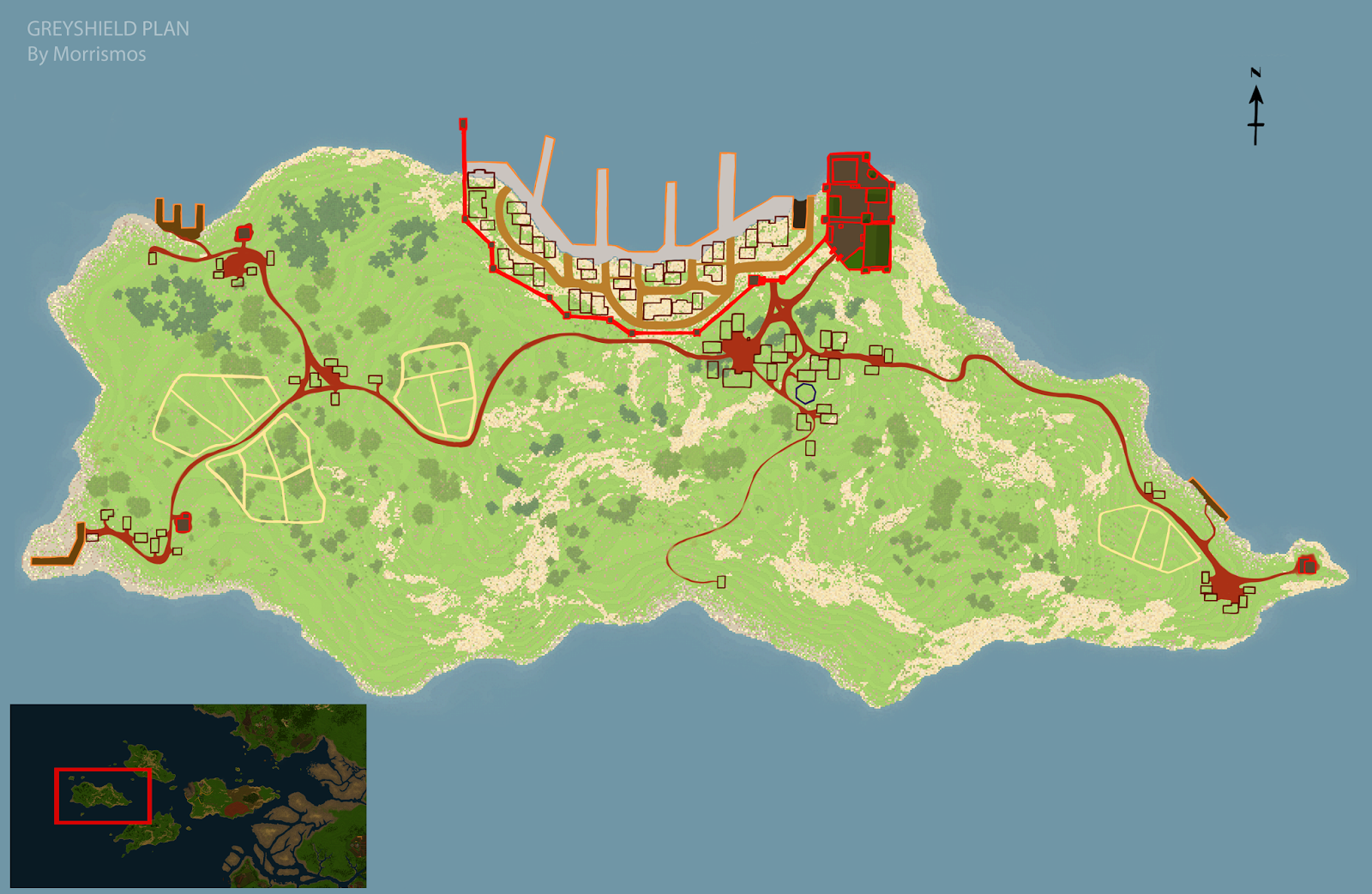 In addition, here are rough examples of harbor side houses and a wall tower for the main keep. 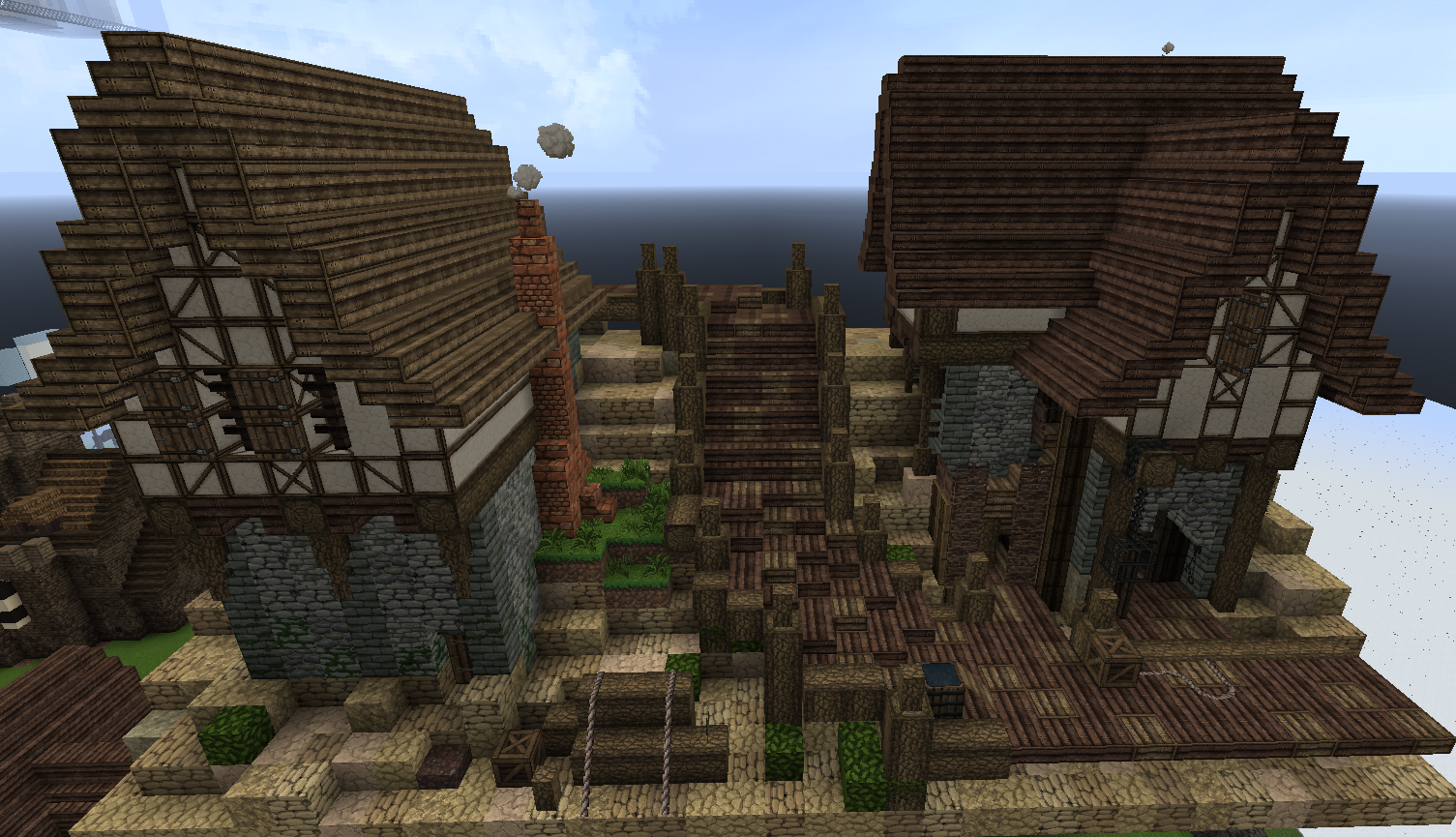 @9986444 said:
Here is my application. Any feedback or suggestions are appreciated.