Just moving the old thread from the archives onto the new site as the project is still being worked on.

Here is the link to the original app, and here is the poorly formatted pdf from the archives including updates I made.

As an overall update the castle is coming along well and is close to completion.

If any E's would like to help me prep the lands so I can start plotting villages and hamlets please let me know! I have 0 WE experience nor the time to really become skilled enough before I would like to start plotting, and I would rather not have the project completely on pause and me begging people while on the server. Heck I'll even trade and promise to build on whatever project you are currently working on and as a bonus I will love you forever <3

Good to know this project is still going on. Why did it take you over 7 months to make a new thread for an active project though?

Well I was abroad for 4 months when the new site was created and didn't get back onto the server for another month once I got back.

Wanted to post an update for Musgood since I am nearing completion of the castle and will start on the lands soon and maybe eventually finish this project (I know right!? Crazy!)

To start I want to link to my request for a more experienced editor to assist with the creak/forests. Don’t need to go in more detail here, just please check the link


Now the castle itself. Everything within the walls is pretty much done! If anyone wants to go through and give me some constructive criticism feel free to I welcome it! There is now a board above the castle for any comments!

Changes: I don’t think there are any major changes that need to be approved, but since Ramen and Banty are my approving mods, if either of them are unhappy with any of the smaller changes I made from the last time I approved changes please let me know so I can address them.
· The biggest change has to do outside the walls and the palisade I mentioned since the start of the app. At first it was located to the front, then later moved to a postern gate. I changed my mind once again and have decided for a small palisade that wraps around the entirety of the castle, similar to the one found at amberly
o Reasoning: The main one is having a smaller one just doesn’t fit well with the castle.
o I will be working on the palisade and the areas inside once I finish with the castle so I won’t have an actual test for a bit, unless one is requested.

I don’t want the palisade to be stealing the show from the castle itself so I will be attempting to build it without it being too be but still having it’s defensive functionality.

Changes to the lands:
· Removal of the hunting lodge for the nobles. Honestly the lands are pretty small so having one doesn’t quite make sense to have one.
· Addition of the Motherhouse. I realize there are a lot of septries around and that’s why I’m going with a motherhouse instead. Here are some extra details:
o Differentiating from a septry: space for silent sisters (preparation for burial, embalming, etc)
o Other Features: Ale production – now on this point I want add that I did research and found that women did in fact produce ale until men took over the profession with the introduction of hops/after the plague. It was a good trade for women who were unmarried or divorced, and following with the monastic tradition of brewing and women in convents, I feel that this would make some good sense as a source of revenue for the motherhouse.
Link to some research
o Small infirmary

Updated map:
Sorry it's a bit zoomed in but that's because I was focusing on the fields but instead went to just label most things: 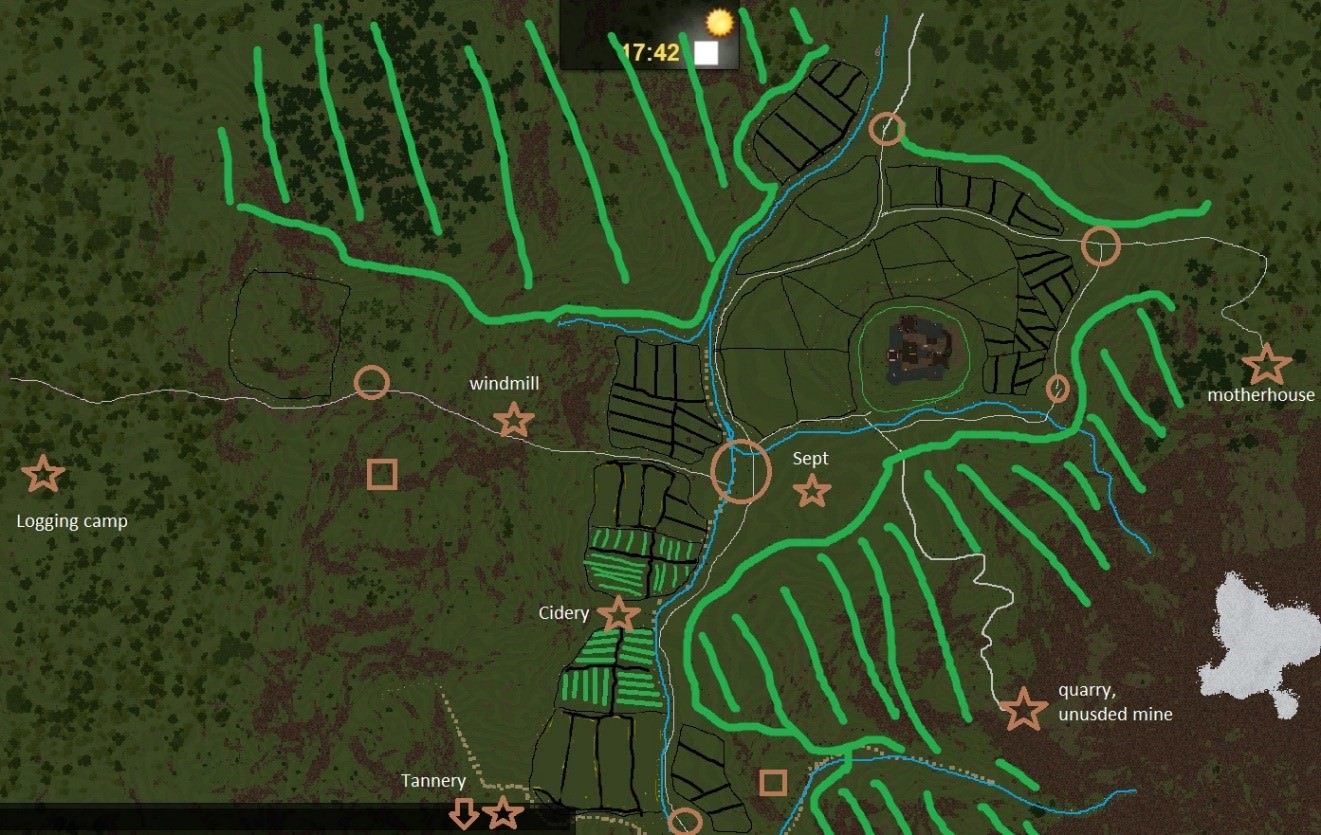 Hey heres my lil mini app for the holdfast, in the map above its the square on the cliffy part in the middle
sort off to the left, by the windmill lol

heres my plan for it, quite small and simple, I thought it would work well for a small quiet sept with wooden
idols inside, which endymion did the interiors

also i took these holdfasts/castles as inspiration and consideration of whats nearby , so gallowsgrey,poddingfeild,blackhaven and musgood castle itself

hope this is all okey
thanks majic, also hg on ur plot i went to ur houses and did a lil palette test bit for the houses as i was unsure but heres some screenshots for ideas for what I've done so far, but of course you can change anything

hope its all good thanks majic,
also can view this on my 3 or 4th floor, the blue floor at /warp majic
-------
also just went over with kool aid now changed the roof a lil to have support under the slate, also removed that reach wood in the roof for spruce oops lol.

added a back wall and yard so its not open at the back and a few other things, also wip on site now
Last edited: May 1, 2018
Reactions: Endymion, Hgkoolaid, AerioOndos and 2 others

For documenting this has my approval and I've gone over some details in game with you!

Thanks for you help!
Reactions: IMajic

Hey!
I would like to apply for the second Musgood holdfast.
Hope you like it! It's at playground (upper left corner).

thanks to Majic for helping
Last edited: May 6, 2018
Reactions: Hgkoolaid and Cl0udkid

Approved from me! Went over in game with some small changes but overall this is great! Thanks so much for your help!

Also for updating purposes this has been copied onto the Musgood lands and I'm currently doing terra work around it.
Reactions: Endymion

Update before I shift to orphaned?

Hello everyone! After a *somewhat brief* break I'm ready to move on with Musgood by opening up the village for building!

Before that though I would like a mod or someone to just give my plotting a quick look over before I officially open the area. All the original approving mods are no longer here so I'm not sure who would like to help, but I will be appreciative to whoever assists!

I plan on working with Cash at the very least to make sure Summerhall and Musgood lands fit together nicely.

Here are my updated style guides which can be found in the village itself:

Lastly, if I could please have my builder tag back on the forums that would be awesome, thank you!

As soon as I get some approval on this I can open everything up
Reactions: Emoticone11, Dyvim and CashBanks

Musgood is officially open for building!

I will be working on surrounding lands/terra and be posting a list of other builds people can apply for!
Reactions: AerioOndos, otty and HalfCat

Hey everyone I have a couple of miniapps open for people if they are interested. Just look below for notes on these for applying

Before we start just wanted to say thank you to all the builders who have so far contributed to the village and I look forward to opening up more stuff for you all to build!

Here we go! If you're interested in these let me know in game and I can give extra info.

1. Tannery (/warp mtanner)
Details: small tannery near the pond at the start of the valley. Should include workshop, shed for drying, and a couple (2, 3 max) houses for tanner and close farming families. Houses should be on opposite side of pond as to not die from the smell haha.
App: Test workshop/shed, and plotting for low class houses.

2. Cidery (/warp mcider)
Details: cidery that produces much of the drink for the Musgood lands. Will have apple orchards on both sides. should be low profile and not very fancy. There are lots of great examples out there feel free to ask around on the server or ask me for inspiration.
App: test production facilities and let me know!

3. Motherhouse (/warp mmother)
Deatils: local motherhouse that is home to silent sisters that will feature prominantly here. should include a substantial lichyard used by the locals as well as facilities for preparing the dead. Other septas live here as well and train children so normal motherhouse stuff still applies (so like shrines to the mother, maiden, and stranger), with possible additions such as cheese making from cattle for some kind of industry if you so choose. You could swap this out for a brewery if you please as well. note: should not be too tall vertically speaking, this should be another low profile addition to the surrounding lands.
App: Feel free to play with the land around this one. If you want to rework the terra for your app go ahead. You don't have to test the entire layout, but some examples of key parts of the build would be nice and a map of what you plan everything to look like.

I am currently working on doing some basic terra for lands and will be opening up future hamlets/apps as time goes on.
Reactions: phondi and Emoticone11

Here's my application for the tannery mini! All tests for the tannery itself (workshop/shed), and the plotting for the low class houses is located at /warp auscar. A plotting map is provided below, while most of the information regarding the mini is at the test. Thanks!

Great app Auscar! My only feed back is leaving access to the pond/water for yards like I've now done in the main village. I left one melon on your test as well for design of the building, very minor. Overall this was very well done!

Thanks! Can I get started right away or do I need the approving mods approval?

Hey Auscar you're all set to start plotting. Approved from me!

I feel like the house backyards could have a less bubbly shape and spread out more
Reactions: thecoddfish

Absolutely, bubble yards are something we entirely discourage. Think about what a real person would have done - why would they create an artificially small yard with unnecessarily curved walls when they could just as easily extend it directly to the pond/stream.
Reactions: Hgkoolaid and WhereRmyDragons

Thanks Wrmd and codd, as with my comments on Auscar's app I will be double checking yards to make sure final shapes address all our suggestions
Reactions: WhereRmyDragons
You must log in or register to reply here.
Share:
Email Share Link
Top Bottom